Share All sharing options for: Habs-Bruins and Caps-Flyers thoughts, Sharks in trouble

Habs-Bruins Game 7
What a game this is going to be. After a thrilling finish to Game 6 and a Bruins win to force this series to 7 games, who really knows what to expect in Game 7. I would 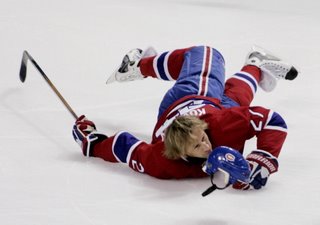 say that you won't see what happened in the 3rd period last game to happen in the final game. Both teams should be a little more cautious.
A big key to this game may be how composed the Habs will be after brain farting in Game 6. Is Carey Price going to be the difference?
Something I really noticed in Game 6 was the asshat play of Alexei Kovalev. I think a really big reason Kovalev did not show up was because Saku Koivu returned from a broken foot for the first time in the series and the spotlight wasn't on the Russian anymore. Think of it this way: Kovalev wore the "c" in Koivu's absence and was a force to be reckoned with just before the playoffs and in the first 5 games of the series as well. Hell, he had 6 points in the first 5 games. Koivu comes back in game 6, and Kovalev plays 21:46, has only 2 shots, no points and was a -3. Some guys love the spotlight, and Kovalev is one of them. Let's see how he rebounds (or acts) tonight.
Personally, I think he's a highly gifted selfish jackass.
5-2 Habs win tonight is my prediction. But I sure hope I'm wrong.

**UPDATE** 2 assists for Kovalev and a bunch of points for the Kostitsyn Buthas and the Habs destroy the B's 5-0. Carey Price showed a lot of composure for a kid in Game 7.


Flyers-Capitals Game 6
All the talk about the Flyers-Capitals game tonight revolves around (of course) Alex Ovechkin. Can he get his offence going in the postseason? One last chance to be a playoff hero since game 1. At least Semin and Fedorov picked up the slack in Game 5 to prolong the series. But it will be a masterful upset if the Caps beat Philly in front of the crazy-spirited blood-hungry Flyer faithful tonight. I say the Flyers end it tonight 4-2.

**UPDATE** Holy crap, it's a Russian Mob takeover tonight! Ovechkin becomes the hero and Semin and Backstrom majorly contribute in a 4-2 Caps win. Now the Flyers are in trouble as they have to beat the surging Caps in front of a sea of red tomorrow.

Unless Joe Thornton can lead by example and show some more heart and offence, it looks as though the Flames will take their series. When I watch that series, I hardly watch the puck. I just follow Thornton around the screen. It's not because I got some kind of sick love affair with the guy. No, it's because I have been hacking the slug for the whole series and I want to know for sure that my accusations are justified. And they are. I don't care that Big Joe has 1 goal and 5 assists in 6 games. As decent as that is, there are too many times where he refuses to shoot the puck in key areas and too many times that he lacks grit and pays the price. Joe doesn't go, the Sharks don't go. How about this... in 64 career NHL playoff games, Joe has only 10 goals and 44 points.

Nothing made me happier than to see the Ducks lose last night. I refuse to cheer for Scott Niedermayer and especially Todd Bertuzzi. 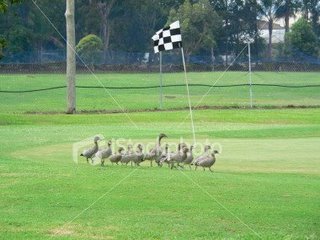 Even better news from the Ducks camp is that Scott Niedermayer has been fined $500,000 by the League for not reporting to training camp last fall, as he was considering retirement. Ha! (Update: Bob McKenzie says that the team itself fines Niedermayer.) I guess there is a rule about that in the CBA. Couldn't happen to a better Duck and a bigger cheating GM in Brian Burke, who really kept Niedermayer and Selanne out of the Ducks lineup to save cap space. (Burke is fighting this fine and trying to reverse it. So then, Selanne WAS at training camp then?

**UPDATE** I think Selanne had a double bogey on his first hole.