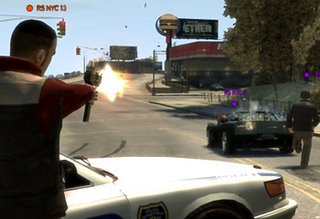 Expectations were so high for Grand Theft Auto IV that one of the biggest surprises is that it's managed to meet them. That it's also gone on to confound these is truly a marvel, and the game's Liberty City is nothing less than one of the greatest videogame worlds yet conceived. It's no less than the definitive open world game, and by that measure the definitive interactive experience of this generation to date.

It's a world that lives and breathes with its own authenticity, and with an effortlessness that has rarely been glimpsed in gaming to date. A storm comes in and the lighting engine paints the streets of Broker with a melancholic taint, with passers-by erecting their umbrellas in the downpour and those more ill prepared raise their suitcases above their heads and run for cover, while in the background a lone saxophonist plays under the shelter of a band stand. The sun shines and the streets burst into life, light rays bouncing off the pavement and glistening over the bonnets of traffic. The level of detail informs every aspect of Liberty City, with even the most secluded alleyway exuding its own atmosphere and conspiring to make Grand Theft Auto IV's world one of the most complete witnessed to date.

-excerpts from the game review by Martin Robinson at IGN. Read the rest of the preview here. 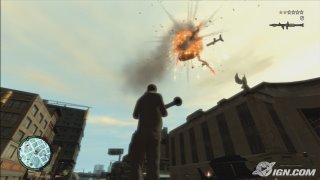 I couldn't be more excited to get my hands on a game. I will be playing it on my Playstation 3 system. Release date? April 29! Tomorrow!! Wooha! Been waiting a long time for the 4th installment. Crazily enough, I still enjoy playing San Andreas on Playstation 2. Haven't grown tired of it yet. That's how good these GTA games are.
GTA 4 is the ultimate gaming experience that is already being predicted as a major hit, and is getting insanely high reviews that don't come around very often.

These could be the highest rating ever for a game.
Running over pedestrians? Cop chases? Blowing helicopters out of the sky? Beating up old ladies to steal their cash? Where do I sign up? This is going to be one awesome game no matter what platform you play it on.