Disgrace thy name is Pittsburgh

Share All sharing options for: Disgrace thy name is Pittsburgh 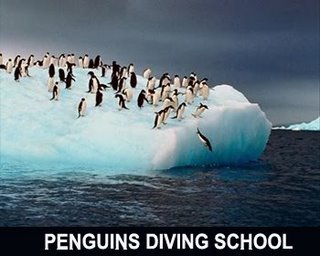 Pretty tough to watch the Penguins-Rangers game today. The outcome was mostly decided by a blown call by the officials, as I believe it was Petr Sykora who was holding Drury's stick against his side making it look like Drury was hooking him. Off goes Drury for 2:00 and bango, the Penguins score a beauty power play goal. That made it 1-0 in an air-tight defensive game where it could have gone either way. Sickening.
The Rangers' non-goal because of the refs whistling the play dead was a fair call in my opinion. They had lost sight of the puck. Fair enough.
But I just can't stand that a blown call decides the game. Mostly, I wish the NHL would ease off on the stick obstruction rule, because guys are going to pull a Sykora and get away with it. I've seen it happen before. But now it's the playoffs, and it's a disgrace to have a chincy call sway the game's result.
Sure, I'm picking on the Penguins on this one, and I feel justified. How was Game 1 decided? By a Crosby embellishment. Game 2? A Sykora cheat. Nothing new there by the Penguins, a team that had the ultimate actor in Mario Lemieux on it's team all those years. And now they have the pouty-lipped, diving jackass in Sidney Crosby to carry on the disgraceful torch. I just don't like it. And I fucking hate Pittsburgh. Always have, always will.
I can't stand that we have to market the game around this gutless little puke.
That being said, (and it felt good to say it), the Rangers are completely missing the boat on how to beat the Penguins. Where was the forecheck? They have guys like Jagr (who was horrendous today) carrying the puck into the Pens' zone and either a) trying to beat 3 guys, or b) making a flopsy-useless pass and turning the puck over. 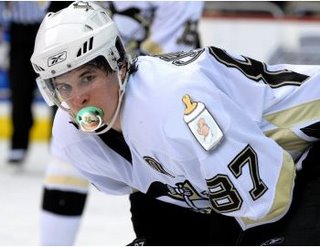 I lost count on the turnovers after 2 periods.
Towards the end of the 3rd, Gomez dumped the puck in and won the race to it and a good scoring chance resulted. There was not enough of those dump-ins today by New York and it costed them. The Rangers need to muscle these wimpy Pens around more and make them pay and dictate the play more. There's no use in leaving this series to 'who has the better special teams' because the Pens will take it. And they know it too. Hence the dives and acting skills.
All I saw today was a disgraceful Pens win and a half-hearted Rangers effort. That will change in Games 3 and 4 I'm sure.

-Check out this site called Diving Mechanisms in Penguins to further understand why these idiots do what they do.

-The Black Hawks and their fans must remember how Game 1 of the Finals ended: with a power play goal that was the result of a Mario Lemieux dive. My ultimate hate for the Penguins came to form at this very moment. After that game, then-Hawks coach Mike Keenan said: "I can't respect Mario for diving," Keenan said. "The best player in the game is embarrassing himself and embarrassing the game." Amen brother. And that was 16 years ago.

-Check out this clip of the Pens at Diving Practice

-I think that what these French play-by-play guys are saying is that Crosby just won an Academy Award for worst actor.

-Here's a great Crosby tribute to fulfill all your diving needs.

I know, this issue has been gone-over 1000 times. I'm just here to keep it alive.