Detour: My week at the Kemess Mine

Share All sharing options for: Detour: My week at the Kemess Mine

Hockey? What hockey? There are still games being played?

This past week I was working at the Kemess mine site. It's only 260 kilometres north of Smithers, but it takes thirteen friggin' hours to drive there, since you have to go 370 km east to Prince George, 150 km north to Mackenzie, then 380 kilometres northwest down a gravel road to get there. We sent a crew up there in a van last Thursday to begin work. On Tuesday, an employee and I flew in on a Northern Thunderbird aircraft to relieve them, and they flew out the same day. We then continued working for the rest of the week, and set out on the long drive on Saturday morning. 380 kilometres from the mine to the town of Mackenzie may not seem like a super long haul, but when you consider the fact they are radio-controlled gravel roads which are almost exclusively single-lane (with pull-outs), it is quite daunting for a rookie like me. 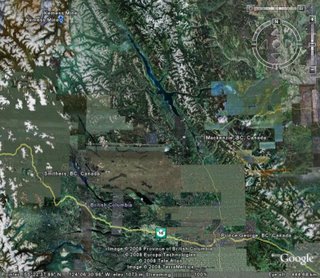 As you can see, on the drive home I had to go in a 1000 kilometre tilted letter "U" from the mine to Smithers, when it would have only been about a 4 hour drive if I could go in a straight line*!

At any rate, I though I'd post some pictures I took while I was there, and a couple from the long journey home through the wilderness. One of the jobs while I was there involved climbing onto the roof of the kitchen and dining hall to access the Range Hood stacks. The weather was fantastic and I couldn't help but snap a few pictures. 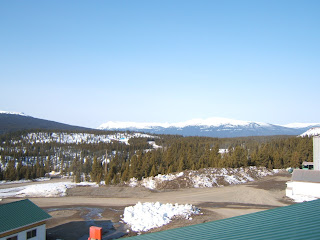 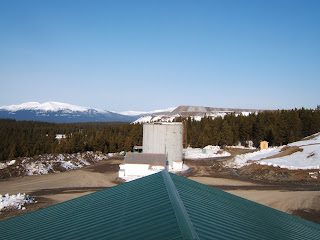 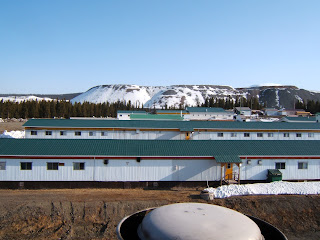 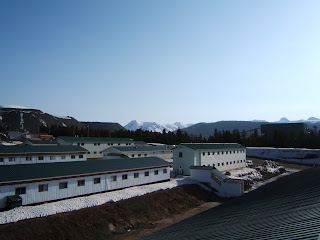 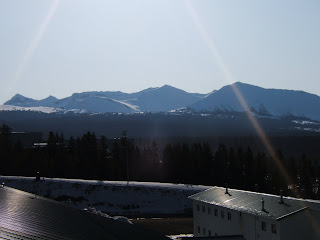 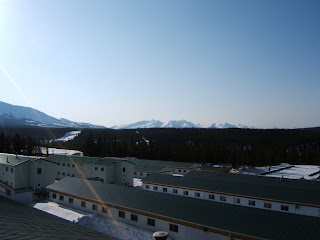 I also got some pictures of a Euclid dump truck. These things are monstrously huge. 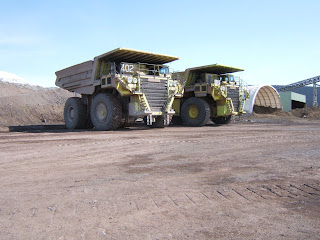 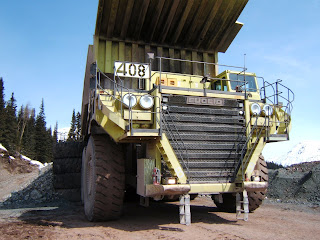 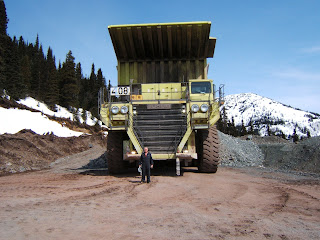 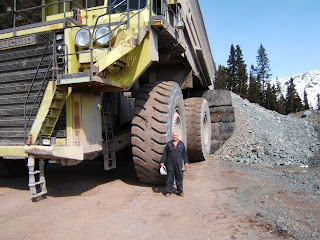 These things are 26 feet high and something like 32 feet wide. They typically haul 250 tons of ore in that massive bucket! The man in the photo is Garry, and he is about 5"8'. You can see just how large those trucks really are.

On the way home, the scenery was quite something. I've been a "northern boy" almost my entire life, and yet some of the sites amazed even me. This first picture was taken maybe fifty kilometres from the mine. 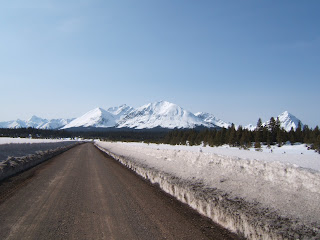 There were many single-lane bridges we had to cross over creeks and streams. The craziest of which was this one over the Omineca River: 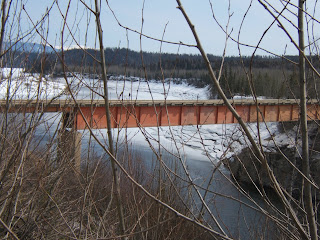 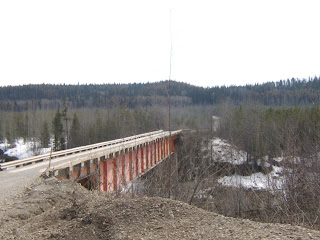 This was the view from the bridge. 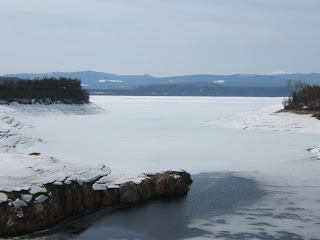 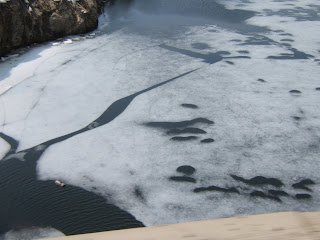 I had never been to Mackenzie before, but there is a really cool-lookin' causeway built over Williston Lake. 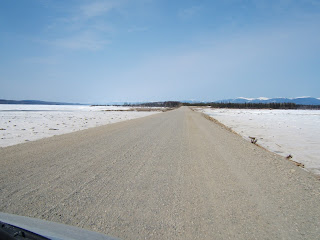 Here is a more panoramic image taken by a guy named Mike Leznoff.

It was a really good week of work, and a great trip home. The next time I do any work at the Huckleberry mine, I'll bring my camera and snag some pictures as well.

*Apparently there are deactivated roads that can hook up with the main line to Kemess, but I'm not much of an explorer and I'm not interested in taking my work van down an unmaintained road! Also, there is a back road from Fort St James that would probably cut an hour or two off the drive, but for the same reason as above we didn't take it.