Colorado and Vancouver: The difference between a good team and a decent team

Share All sharing options for: Colorado and Vancouver: The difference between a good team and a decent team 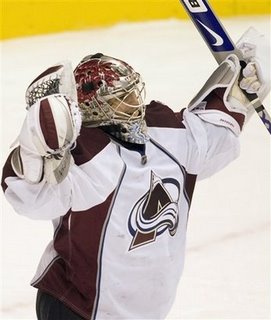 The Canucks proved to be merely 'decent' tonight in a 4-2 loss tonight against the Avs. 'Decent' is putting it nicely. Up 2-0, the Avs found life on the powerplay and scored 3 goals in just over 5 minutes to erase Vancouver's lead. The Canucks had looked so good up to that point.
The Avalanche have enough offensive power to bury their opponent when given the chance. Which team is better at blocking shots? Colorado; look no further than Foote and Laperierre. Which goaltender was better? Theodore by a long shot. Luongo looked 'off' tonight again. He was further out of his net and goes down early, putting him out of position if a rebound goes out or the shot goes wide. Theodore was square in his net and looked way more poised. Yeah, Theodore looked poised. Much has changed for this mile-high city team.
I think the blocked shots difference and the goaltending were the keys to Colorado's win. And hey, they can protect a lead as well.
What a change from the Calgary game. But that's why I said that the Flames "stank it up" in Vancouver on Sunday night. Colorado is a better team than Calgary and Vancouver combined. They have secured a playoff spot.
The Canucks will now have to win their remaining games against Calgary and the latest non-playoff team Edmonton. The damned Predators, who just won't quit (thanks for nothing, St. Louis..bastards) will have to lose at least one game against either Chicago or St. Louis to even give us a chance.
A crazy night indeed. One minute the Blues are up 3-0 on the Preds and I'm loving it. Then it's 3-2, 3-3, then the Preds win in OT. Then the Canucks are up 2-0 and looking poised to finally beat the pesky Avs. Colorado ties it and then finishes Vancouver. In the meantime, Calgary defeated Edmonton in regulation to push the Oilers out of making the playoffs. (See Iginla's shit-eating grin after that game???)
Edmonton being eliminated only provided minor consolation. It's Nashville that we have to worry about now, and they are playing like they deserve a playoff spot, and now the ball is in their court.
I'm not jumping off the Nucks wagon here. We have a chance. I've just never quite cheered so much for St. Louis and Chicago before!
Brace yourselves for a week of stress!

2. Markus Naslund. He was all over the ice tonight. He was back checking, hitting. He stepped it up.

3. Willie Mitchell. 1 goal and over 25 minutes of icetime.