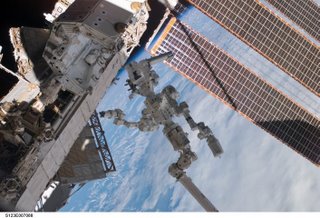 The Flames have some 'splaining to do!

Even Oiler fans are stunned by the heroic exploits of the Canuck Legend, Trevor Linden.

And speaking of the man himself, here's a nice article on Linden written two days before he picked his team up on his shoulders and carried them to victory on the weekend.

And to wrap up a trifecta of Linden love, guess who said this: "I thought Ovechkin was out there tonight for us" about the Canuck Wonderboy.

The Team1040 has a poll on their sidebar asking if you think Brian Burke is the right choice to light the Olympic flame in 2010. The poll results thusfar may surprise you (or, they may not).

The "joys" of being a sports fan in Los Angeles. Suddenly I have a hankering to cheer for the Dodgers.

Must be nice to know you're in the playoffs. Detroit and Vancouver have equally rotten fortunes when it comes to geography and travel schedules. Yergh.

For the Capitals, it really does come down to this. Ovechkin vs Crosby in the first round of the playoffs would be tremendous.

If the Canucks manage to eek out a victory tonight, I'll be gloating endlessly over at Tapeleg's place. Oh please let it be so!

More April Fool's gags around "teh intarwebs". Be sure to check the comment section of that post for a few others.