Share All sharing options for: Anatomy of a Failure, Chapter II: Defense 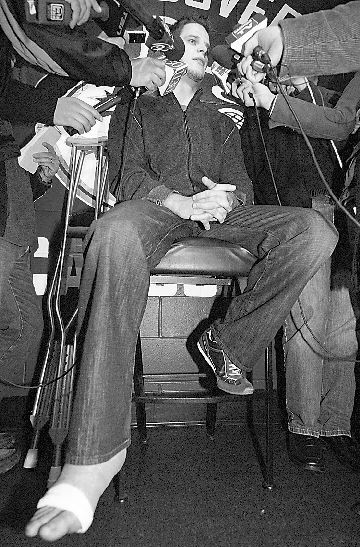 If goaltending is Vancouver's best weapon, their staunch defense was supposed to be the insurance for that weapon, making it that much harder to score on a team with few goal scorers. A neat trick that worked a year ago, but one that failed miserably in its encore tour.

Beset by injuries from before day one of the regular season, Vancouver would go on to lead the league with 164 man games lost to injury on defense, a defense which in the end was patched together with waiver wire additions and untested rookies. That, in and of itself, is a miracle considering they remained in the hunt for as long as they did, but the frequent breakdowns and inexperience as a unit simply undermined the strength in net.

Let's go one by one:

Mattias Ohlund - The #1 defenseman on the team, Ohlund had one of his worst years professionally. With the exception of the 1999-2000 season, Ohlund played in the fewest amount of games (53) and had the least amount of points (24) then any other year he's played. His 11 special team points (4G, 7A) also ranks near the bottom of his career totals and the final insult was bowing out of the season on March 13 with knee surgery to remove bone chips. On the plus side, the Wild hate him now so he's got that going for him.

Willie Mitchell - The #1 shutdown defenseman on the team, Mitchell wasn't immune from the IR either, suffering a stress fracture to the L2 vertebra in January. Mitchell returned quicker then expected and managed to put together a decent year production-wise for someone like him (2G, 10A). But it's his caliber of play that slipped this year, leaving Vigneault to single him out by name after a 3-2 loss to the Wings: "Basic fundamentals is taking away the pass and he got beat twice. That's not the Willie Mitchell we know as a defensive specialist. He's having a tough time." An obvious candidate for captain if Naslund leaves, now the knock on him is the coach may be against him. Peeerfect.

Sami Salo - The #1 injury-prone defenseman on the team, Salo played his second fewest games as a Canuck this season (63) and had his worst season point-wise (8G, 17A), 12 points less then he had last year. Of course, how the hell else is he supposed to score when he started the season on the IR (fractured left wrist), jumped back on the IR exactly a month later (broken nose) then had some day-to-day spells with his groin and "undisclosed" related injuries later in the season. In five seasons as a Canuck, the Finnish MacInnis has averaged 68 games a year and his list of injuries in the past three years alone is what most people would get, oh, in two lifetimes. At this point, we should be happy just seeing him stand upright.

Kevin Bieksa - The #1 bad story of the year, Bieksa followed up his break-through year with a year remembered for a serious injury. Following a three year contract extension last summer, Bieksa's play slipped (as did his partner Mitchell) as the season started and then took a mammoth detour south when he received a severe calf laceration from Nashville's Vernon Fiddler that caused him to miss over half the season. The usual punishing Bieksa's play slipped even more when he returned, creating if nothing else a love/hate relationship with fans.

Alex Edler - The #1 feel good story on the entire roster, Edler was forced to mature at light speed when inserted into the lineup to contend with the multitude of injuries. Called up on 10/15, Edler never left and would eventually play in 75 games, contribute 20 points (8G, 12A) and earn himself a spot on the NHL YoungStars. More importantly, he showed that the Vancouver scouting department doesn't always truly revoltingly suck and gets one right every once and awhile. This, too, means that Edler is an obvious asset that Nonis can trade or be one of the key pieces to build the next generation around. Who knows, flip a coin.

Aaron Miller - The #1 old guy on the blueline, Miller did what we all should have expected of someone who spent the past five seasons languishing in the prisons of LA: not much. Showed up in 57 games, tallied nine points (1G, 8A) and suffered both a hairline fracture in his leg and a reoccurring shoulder injury that eventually knocked him out of the lineup in early March. A pending free agent, don't expect him back unless Nonis loses his mind.

Mike Weaver - The #1 tiny guy on the team, his claim to fame was his laughable lack of offense which stood out on a team plagued collectively by the same problem. Weaver would show his mug in 55 games and add a single point (1A) but, despite that, was useful as yet another body to fill in when injuries mounted. To that end, Weaver was actually a decent asset this season and while it's doubtful he'll be back, there will always be the one night he was king of GM Place.

Lukas Krajicek - Honestly, I damn near forgot about Krajicek so he can be the #1 forgettable player on the team. Krajicek had his worst season in four years, playing in 39 games before bowing out in January with season-ending shoulder surgery. In his brief time, Krajicek added 11 points (2G, 9A) and hasn't yet reached the level of the slick, puck-moving defenseman that Nonis envisioned when he was raping Florida for Luongo. Assuming he isn't moved, he'll get another stab at it next year and, if he can build on his 16 point career high, it'll be a relief.

Luc Bourdon - The golden farm boy played in 27 games and netted two goals. One could argue that, with all these injuries, this would have been the ideal time for Bourdon to step it up. Yet, while definitely serviceable, it's appearing increasingly obvious that Bourdon may not have been worth the #10 pick in the first round in '05, made all the worse by the fact that Kopitar, Marc Staal, Stastny, and Latendresse were all drafted after him. Coupled with the emergence of Edler, it's unknown what Bourdon's role will be with the team, if any, next season. In a word, he's frustrating and like a lot of fans, I've been hoping to see Bourdon become the real thing since the Crosby draft.

Nathan McIver - Another stop-gap, stay at home defenseman who'll try to murder you if you look at him twice, McIver was called up from Manitoba 17 times this season, adding zero points but adding 52 PIM's. If he's around, his role will be the exact same next year.

Zack Fitzgerald - He appeared in one game. Took one shot. Played 13:20. If you ran an errand, walked the dog out or took a long shit, you missed it. Who cares.

2008-09 Outlook: As long as Luongo is the major investment, this team will continue to have a good defense. Injuries, stop gap players, slipping production and poor play ran this defense into the ground. But there is too much talent to repeat that; I'd be amazed if the top four guys (Ohlund, Mitchell, Bieksa and Salo) didn't all have a far better year in 2008-09.

The real question is how will Nonis reshape the back end. Will he move a coveted guy like Ohlund for a winger? Or Salo's shot for some offense? Edler in a package for a top-line center? Bourdon for a six-pack? Time will tell. But like Luongo and the goaltending, no one should worry (yet) about this defense. This year, as Bert would say, it is what it is.