Anatomy of a Failure, Chapter I: Goaltending

Share All sharing options for: Anatomy of a Failure, Chapter I: Goaltending 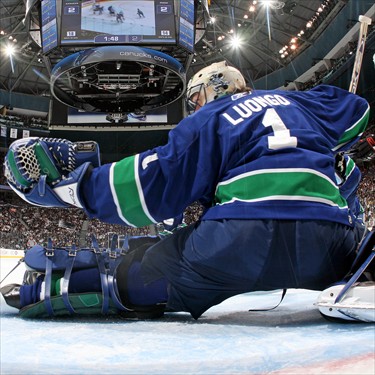 It's been an odd transition to go from a goaltending graveyard to having no problems with that end of the rink. Dave Nonis, in what will likely come to define his term as GM (pending this offseason), was kind enough to end the string of Potvin & Cloutier-induced nightmares by landing Luongo two seasons ago. As we know, last year Luongo showed how valuable he was, stealing games and dragging his offensively-challenged team kicking and screaming into the playoffs.

It was speculated at the beginning of the season that this team would again only go as far as Luongo could take them. Clearly that didn't go as planned, so what was different? On the face of it, a few things:

1. Injured - For the first time in a Canuck uniform (which didn't involve a bathroom situation), Luongo succumbed to an injury that kept him on the sideline. On December 10th, Luongo sat out the first of what would be four games with bruised ribs. Curtis Sanford took the reigns and gave up 13 goals in that stretch. The Canucks would win just one of those game.

2. The OT - Luongo was 6-8 in the shootout with a .722 Save % (24th in the league). If anyone is going to table an argument that Luongo needs to shore up part of his game (ignoring rebound and puck control at times) it would be the one-on-one frame. Though it should be noted that he faced more shots in the OT then any other goalie (54), a product of his team being unable to score in both regulation and the shootout.

3. Distractions - Having your wife go through a "delicate" pregnancy while you're 3,000 miles away being scrutinized by an ever-present media in a hockey-mad town? Speculation: Sure, that should take a toll. Skipping the All-Star Game, flying back to Florida in March before a key game with the Wild, having TSN and other national media outlets start the "he wants to go back East" rumors and, oh yeah one more thing, the team in front of him being beset with injuries and, often, incompetence.

4. Fatigue - This is the culmination of the third point; having seen how focused Luongo was last year and how Ian Clark raved about his preparation and dedication on game days, you didn't sense it was the same this time around. Vigneault hasn't started Sanford since January 29th, leaving Luongo likely even more fatigued over the last 10 weeks. Between March 21 and April 3, 2008, Lui's numbers sunk to Cloutier-esque proportions: 1 win, 6 losses, 3.67 GAA, .874 Save %. Granted they mailed in their final performance against Calgary, but when asked to assess his 3 goals on 8 shot performance, he said "I tried to bring it, but obviously I didn't have anything left in the tank. I don't care, honestly. The season ended Thursday. It doesn't matter whether I started or not, all right?"

I wouldn't even paint this as a bad year for Luongo; he still is ranked 8th in wins, fourth in shutouts, and his 35 wins and 29 losses is still better then any year he had in Florida. Simply said, in another season saturated with one goal games (Vancouver had 40 of them) and an anemic offense, he just didn't put together another season worthy of a Vezina-nomination.

2008-09 Outlook: Word out of the ground zero this morning is that not only does Luongo not want to leave, but given an offseason to recharge, will come back to Vancouver with rage coursing through his veins ready to put this season behind him.

Goaltending is the least of the team's concerns. While Sanford isn't a lock to be back, it would be far better for this team to land a proven back-up should Luongo go down with injuries again. No use throwing Schneider or MacIntyre to the wolves unless they are ready. If Sanford rolls out of town, it's possible a guy like Osgood, Thibault or Lalime could be brought in.

This season was an anomaly for Luongo rather then a trend of things to come. The more pressing concern should be not just getting him an offense to compliment what he does at his end of the ice, but also giving him a reason to want to resign here in two seasons, a belief that this team will not have another 2007-08 downward spiral.