Share All sharing options for: 5 Things Mike Gillis will make his top priorities with the Canucks 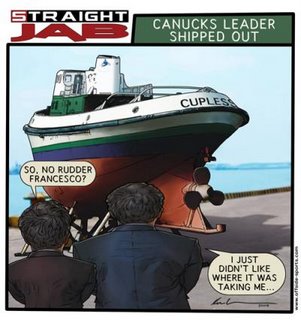 5 THINGS MIKE GILLIS SAID WILL BE HIS TOP PRIORITIES:

1. Deciding on a head coach. Mike Gillis says making a decision on his coach is the most important task he faces in the immediate future. He will sit down soon with current coach Alain Vigneault, who has a year left on his contract.

2. Gauge Roberto Luongo's long-term commitment to the organization. "Roberto is a priority," said Gillis. "If we don't have him as a priority, our shelf life with him is about two years."

4. Settle on the status of captain Markus Naslund, a former Gillis client, who becomes an unrestricted free agent July 1. "If we can't provide an environment that makes perfect sense for Markus to be here, then he won't be here," Gillis said.

5. Improve scouting and player development. "I've been forced to evaluate players very early," said the ex-agent. "At most, I've represented about 20 players in any given year in the NHL and, if I'm not correct in that evaluation, my family doesn't eat. I have to be right."

My opinion of each:

1. Keep Vigneault, and then refer to #3 above. Viggy's system is good. He just did not get enough scoring from the go-to guys.

2. I would love to see Louie stay here longer than 2 years. But if his wife and kid refuse to move to Vancouver then we have a Chris Pronger situation brewing. That's the last thing we need. I think our shelf life with Luongo is 2 years regardless. I don't see him staying here longer, winning team or not.

3. I can't wait to see who Gillis brings in. All I know is that he has a lot of cap space and a limited supply of good Restricted Free Agents to choose from. Hello "blockbuster trade"....

4. Screw Markus and screw making an environment here that he likes. Time to move on from this guy.

5. I like the scouting on our defencemen, but who the hell is scouting forwards? Mason Raymond is good, but he's no Datsyuk or Zetterberg, who were drafted off the radar by Detroit.


Above image is another genius creation by Ken Henderson at Straight Jab.