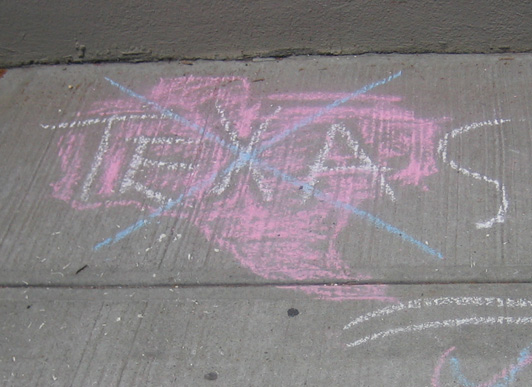 Seeing how I spent most of last post season following the "thrilling" matches between these two teams and noting that our beloved Canucks may not make this post season trip, I'm thinking why not dust off some old graphics and watch these two teams trap each other for a solid 60 minutes in one last 2007-08 game, eh?

Rumor has it Linden (gasp!), Cowan and Rypien are all active. Shannon, one of the few, smurfish sparkplugs on the team, is not. So prepare yourself for lots of useless penalties and, if we're lucky, another goal-less game.

Feel free to join in come gametime. Misery, as you know, sure does love company.

(Anthem) - Well, I'll give this to Dallas. Their singer for the anthems? Oh yeah. Nicely done.

17:20 - Well, the line of Laz-Mo-Pettinger connects early as Matt Cooke's replacement puts, according to Craig Simpson, "an easy shot" past Holmqvist and the Canucks, shockingly, have the lead 1-0.

15:20 - Burrows barrels down on Holmqvist but the netminder makes the save this time. So far, this game is all Vancouver thereby thoroughly screwing up all of my predictions that they were coming out here to be destroyed in front of a seething Dallas crowd.

13:45 - Dallas is picking it up a bit with a blast from Richards from the point but Luongo stops it as if to say "Hey clown, it would have been a bit better had you come to this team. Enjoy playing with Turco and Modano while I stop your pathetic shot." Then he may have made a comment about Richard's wife, I'm not sure. I'm waiting for Simpson to clue me in.

12:38 - MySpace draws a penalty, but did you know Dallas has the best power play in the league? That used to be Vancouver. Sigh...

10:52 - Morrison feeds Kesler and Kes whacks his 20th home to put the Canucks up 2-0. What the hell is going on here? I'm confused, what team is this?

10:05 - Congrats to Kesler for his career-best 20th goal. Also Jeff Cowan just had a shot. Raise your hand if you remember him. Nope, me neither. But hey, go get 'em tiger.

8:05 - OOOOOOKKKKKK....work with me here. The Dallas D coughs it up and Pettinger freezes Holmqvist for a second which is enough to pass off to Naslund for the captain's 23 of the year. 3-0 Canucks and I officially do not know what happened in 48 hours to this team.

3:06 - Mitchell takes a bomb of a shot for the Canuck's 11th shot of the game. When Mitchell (an ex-Star) is taking cannon shots from the blueline, you know things are going your way.

1:39 - The last few shifts it's dawned on Dallas that there's a hockey game that they can actually contribute to, so Luongo is seeing some rubber now. The last shift ends with Mitchell bulldozing Hagman down and then smirking.

0:14 - Lundqvist dumps in an easy rebound and Dallas saves some face scoring in the final seconds of the first. 3-1.

(End of the first) - The last goal aside, you have to think Dave Tippett is questioning putting his backup in. Though one can hardly blame him; he must have seen the Canucks as easy prey and a good reason to rest Turco. Well, Pettinger of all people has helped make that a bad decision. Though with that last goal and maybe a change in net, the second period should be a different situation. That or Cowan will score five goals and split the atom with his mind.

(random thought) - Has ANYONE ever called Don Cherry out for being a fool? I'm just asking; I know he's Canada's favorite son but really there are times that he and his clothing style just need to be stopped. For the children if nothing else.

(Start of the second)

17:15 - Dallas has started this period with venom in their eyes. Hagman almost netted his second and, now FINALLY, we are seeing the Canucks we were thought we'd see.

14:40 - The Canucks had some decent pressure, but before you knew it, MySpace takes a call (hooking?) and now the Stars have a golden chance to make a game of this. By the by Star fans, I have the Rangers game on mute and Smith is doing juuuuuust fine for Tampa.

13:00 - Beeska takes an elbowing call and the Canucks, as they so often do, are handing this game back to Dallas as best they can. 5-on-3 time.

10:30 - So if the Stars play the Ducks in the first round, who precisely do you root for? The stadium ceiling to fall or the Stars?

9:00 - Rypien almost set up Linden thereby scaring Vigneault down to his core. No worries Alain, they didn't score and the ice is still tilted badly in Dallas's favor. Your team lost their sudden first period lead and are getting outshot again. So kudos to you my friend, par for the course.

7:39 - Turco ices the puck and the crowd cheers. No wonder Tony Romo calls this area home.

6:40 - Hahahaha....WOW. Edler coughs up the puck to a streaking Richards and he totally freezes Luongo and ties the game up 3-3. Well done guys.

7:29 - Modano takes down Raymond and the Canucks powerplay will get a chance to tease us for two minutes.

7:29 - Richards has as many goals as Kesler this season? Wow, Tampa IS bad.

4:00 - Craig Simpson (sadly) nails it: Dallas is gaining the Vancouver line almost uninterrupted. It's a joke. A 4-4 ensues now with Burrows and some Star in the box. Great, give them more ice to work with.

1:45 - Hey rock on Canuck fans: Beeska takes a hooking and unsportsmanlike call. Let me go ahead and guess: 4 minutes in the box, let's go ahead and admit a Dallas goal will be had before the end of the period.

(End of the second) - Well with the exception of not giving up a last minute goal like I thought, that had to be one of the best periods followed by one of the worst periods this season for Vancouver. They were credited with 10 shots which feels like about 9 too many to me. 20 minutes left and this is Dallas's game, sorry to say it. If the Canucks want these two points, they're going to need a gritty, strong effort the likes of which has not been seen in at least three straight games.

(Start of the Third)

18:55 - Well one minute in and Dallas hasn't scored. Wussies. Can't score on a shorthanded Vancouver team? Bunch of AHL punks...

17:21 - Against all odds, the Canucks are back to full strength and still tied with big D. By the way, anyone seen the Sedins today?

17:00 - This is how you define a bad day: Naslund swept a puck toward Turco and, with Morrison driving hard, the puck may have gone off of Robidas's face and THEN Robidas's teeth crash against the post. So Vancouver takes a 4-3 lead (which is crazy) on Morrison's first goal with his new wrist, Dallas loses another D man (which is crazy) and Robidas just text booked the definition of a bad day.

13:20 - Dallas is back in control now as they have the Canucks defense running around again. Luongo makes a few strong saves though...and honestly I am still tripping on Robidas's bad luck. The only thing missing from that play was Pronger stomping his groin.

10:32 - Robidas is back and Cowan comes out of no where to crash into the Dallas net and send Turco off for the man advantage for a few seconds. Cowan, seriously man, we need to talk about your play this year...

9:24 - Raymond takes a hooking call, the first of his NHL career. Luongo dies a little more inside.

7:27 - ...now Mitchell, on the PK, takes a puck to the face. Burrows chucked him on the bench at the end of the shift as the penalty ends and Vancouver has to survive just a few more minutes.

5:45 - With Mitchell bleeding profusely on the bench, Morrison trips up Turco though both may be getting penalties on this one. Not sure...but it would make sense. Turco deserves one because I say so.

4:00 - Teethy Robidas takes down Naslund on a breakaway and the caption gets a penalty shot. Here goes...

...and not even remotely close. Turco didn't even bite on Naslund's meager, slow deke. Shocker...

2:40 - Not much time left and the Sedins are skating together again. So rest assured nothing could go wrong now.

1:40 - Turco makes two great saves on Pyatt and Naslund on back to back plays. A great pace to end this one...

:47 - Turco goes to the bench and Dallas takes one last shot snagging a point.

:6 - Linden ices it again and Dallas will need to win the face off and beat Luongo immediately. Otherwise the Canucks will move to 82 points and 6th in the conference.

:00 - Linden clears the zone one last time and that's it, Canucks win.

Postgame: You got just about everything tonight from Vancouver: an amazing first, a deplorable second and a typical third period (by which I mean one goal and then Luongo takes care of the rest). Pettinger, Morrison and Naslund picked up the slack for the slumping Sedins (no points again, Hank was -1) and Vancouver moves into a tie with Calgary and Minnesota (though the Wild are beating LA with one period to go right now). Edmonton needs to starve off Phoenix tonight with a win and the Canucks, SOMEHOW, will still be in the thick of this race. Good stuff.