There was this guy who was on his way to the bar...

Share All sharing options for: There was this guy who was on his way to the bar... 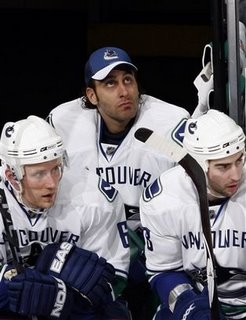 Tonight was different. Tonight I was having a delicious mushroom steak dinner with my family. When I went to the computer to check the score of the Avs-Canucks game, it was 2-1 Nucks after 1 period. "Good" I thought, "The Canucks will protect this lead tonight." Well, in between logging off my parents' computer, searching for lost keys with my wife, and then actually getting to that bar, the Avalanche had scored 4 unanswered goals, and it was 5-2 Avalanche by the time I got there. I thought they were showing highlights from an earlier game in the season!
The bar was empty. Every person had left in disgust early in the 2nd period.
I'm not going into details about the game, because I want Temujin to do that as he has been given contributor keys to this site. Instead, I will let you know what lies ahead for mostly Nashville, who seems to be the favorite to bounce someone out of a playoff spot.
Here is who Nashville has left to play, and their records against these teams:

These upcoming games are a tossup for Nashville. The only team they OWN is Columbus. The rest are all close. Keep in mind, the Preds play 4 out of 5 of their remaining games on the road. They are 16-17-4 on the road this season.

As for the Canucks:

- Friday, Minnesota. The Canucks 3-3 against the Wild this season.
- Sunday March 30 and Saturday April 5, Calgary. Canucks are 4-2 against the Lames.
- Tuesday, Colorado. The Canucks have won 2 and lost 5 against the Avs. God dammit!

So what am I trying to say here? Be positive! The Canucks can turn this shit around on a 4-consecutive-game homestand and bury the Preds in the final week. The Preds may play easier teams in the final 5 games, but their records against those teams don't show any domination.
No, a Northwest Division is probably not going to happen. But who cares? Let's just get in and see what happens! I like our chances of getting in because of the home ice advantage factor.
I'm not scared of Detroit. Fuck' em! We can take those sucks in a 7-game series!