The Gods have smiled

Share All sharing options for: The Gods have smiled 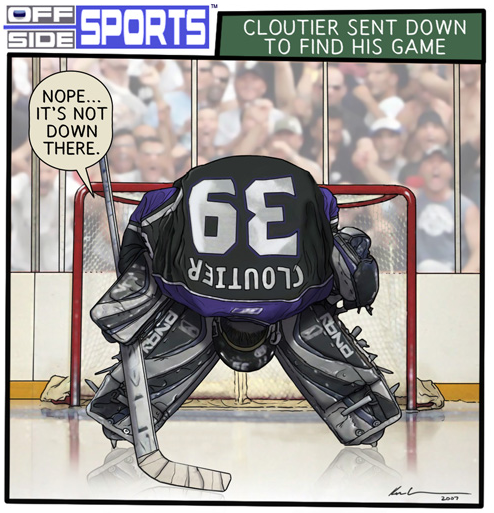 It's a hap-hap-happy day in Yankee Canuck land.

I've been waiting for this day for a long ass time. Seriously. A long time.

Despite injuries, being sent down to the AHL and basically being a massive failure in Los Angeles, Marc Crawford has seen fit to make me a happy man by icing Cloutier against the Canucks tonight.

I should be focused on bigger things like the much needed two points, the small but vital winning streak the Canucks are on and how I wish lesbians lived next door to me so I could go borrow some sugar, but I want the Kings to have to pull Dan-o in the first period. Which, against this version of the Canucks, would have to rank as one of the lower moments for him.

I have no reason to hate on the guy as I do...besides, you know, never showing up in the post season at a time when this team actually had the best line in hockey and a 3-1 lead on the Wild in the second round of the playoffs. No, not bitter at all.

We've beaten Bertuzzi and now it's your turn Dan. Consider it the final page in a chapter of unfulfilled promises in B.C. And then we'll welcome you with open arms and a beer next time around. Promise.

Tonight though? I beg of you to be the Cloutier of old and I beg Edler, Ohlund, Salo, Luongo, the goal judge and every mother and one armed person of spunk to all shoot at him from their respective places on the ice or in the stands.