Sunday's games provide a parting of the Red Sea for Vancouver

Share All sharing options for: Sunday's games provide a parting of the Red Sea for Vancouver 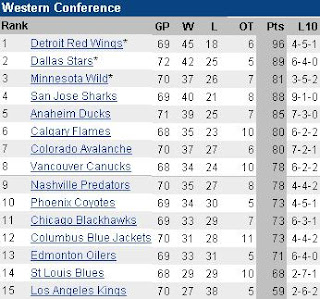 Yesterday turned out to be Super Sunday for the Vancouver Canucks.
-Dallas (who we aren't going to catch anyway) beats Colorado 3-0. Apparently Forsberg missed the game with a groin injury...Foppa's fragility continues.
-San Jose (who we also are not going to catch) beats Minnesota 3-2.
-Detroit beat Nashville 4-3.
The Canucks maintain 8th spot in the West and once again have 2 games in hand over the pesky Predators and the Wild.
Now is our chance to make a move. Now begins a crucial week, as the Canucks take on the Kings tonight, the Ducks on Wednesday, the Coyotes on Thursday, and the Stars on Saturday. Talk about a busy schedule! Every single one of this week's games are on the road. So we'll see the resolve of this Canucks squad.
One game at a time. The Kings look to be trying to finish last in the NHL for the 1st overall draft pick. But I wouldn't count these guys out or take them lightly. Can you believe the Kings have beat us 3-out-of-3 times this season? What the hell is up with that? If there's a motivation factor for the Canucks beyond a playoff spot, it should be to not let these guys sweep the season series. Unreal.
The Kings have only won once in their last 5. That was a shocking 2-0 victory over Ottawa. The Nuckleheads have won 2 in a row, scoring 10 goals and only allowing 4 against in the process.
Vancouver looks fairly confident on the ice. They get caught running around in their own zone more often lately but hopefully that changes.
Is Dan Cloutier going to play for the Kings? Or will 26-year old Swedish suprise Erik Ersberg, who is rolling, keep his spot between the pipes? We shall see.
Brendan Morrison will be accompanying the team on the road trip, but it is unknown when he'll make his debut. I am formally welcoming his return, just for the added offence. Maybe he'll kickstart Naslund, who is playing perimeter-useless hockey lately and hasn't scored in 8 games. 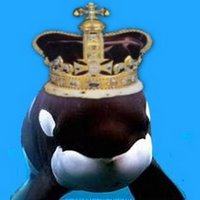 Let me make one thing clear about Markus: I hack him constantly because I expect more of him on the ice as the captain, and I will continually do so. At he same time, it's easy for me to sit behind a laptop and heckle the guy, but in reality, I would love to meet him, go for a beer with him and talk to him about it. I don't like to see him struggle, but he is human. And I'm sure he's a standup sincere guy. But Markus, please, show some grit. Stop trying to shoot from the top of the circle. People know that trick. Shoot the puck more, and from different angles. I know deep down he's hating the slump, and it's easy to call him gutless because he looks so timid all the time and shows no emotion. But I can't wait for him to snap out of it. OK, no more nice stuff.
Empty net goal or not, the Sedins are a one trick pony and it is continually grating on my nerves. It's amazing how we are getting the secondary scoring right now, but the Sedins need to become a factor SOON, as the secondary scoring may dry up.
Is Kevin Bieksa Jovo the 2nd? At times he's brilliant. Other times he's a liability and coughs the puck up too much out there. If he keeps this up, I'm thinking we'd be better off tossing the guy and keeping Luc Bourdon out there.
A nasty stat from Canucks.com:

The Canucks enter tonight’s game with a 5-9-1 record against the Pacific Division, going winless in their last five games against that division (0-4-1).


Will the Canucks beat the Kings? Are we going to see continued consistent effort?
I say "yes" and we beat these bottom-dwellers 3-2 tonight.