Share All sharing options for: Scooped some Canucks tickets! 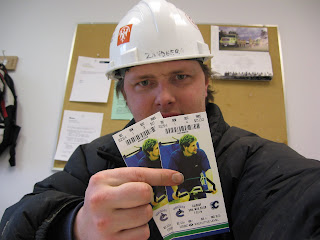 Sometimes it pays to have connections, huh? I just recieved 2 tickets to the Canucks and Flames game on March 30th, free of charge. I am taking my wife to her first ever NHL game. They are box tickets on the Executive Level at good ol' GM Place. I've never sat higher than about the 20th row from the glass, so this will be different, but COOL. Free booze? Oh hell yeah! Canucks tickets are a treat for us people who live in Northern BC, 14 hours north of Van.
The best part about this is that it will be a crucial game to the Canucks' playoff hopes and will be a playoff-like atmosphere.
I'll take all the pictures I can and post them after that game. Hopefully the pic of me jumping over the glass and shit-kicking Jarome Iginla turns out! ha!