Share All sharing options for: Return of the Living Naslund: Canucks beat Dallas 4-3 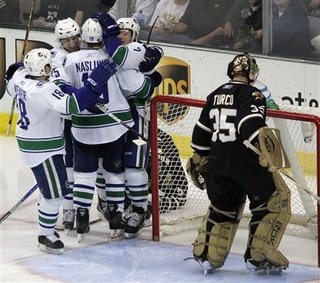 What a game against Dallas today: a mind-numbing 4-3 win by Vancouver. I will just make a couple points about this one.
- Vigneault separated the Twins and seemed to get 2 results: more inspired play by both and a lot less anxiety in their game. It didn't translate on the scoreboard unfortunately, but at least there was improvement.
- blowing a 3-goal lead is/was not characteristic of this 'Devils of the West' team. Bieksa got caught pinching on the Brad Richards shorthanded breakaway goal. That is why I call him Jovo the 2nd. Of course, it's pretty easy to pick on a guy who plays over 25 minutes per game. (see below) I thought the team settled down after the 4th goal though. They just lack consistency on D.
- Naslund-Pettinger-Morrison is gold! 9 points for them combined. Said Vigneault post game:

"We wanted to try something to see if it couldn't kick-start our offense," Vigneault said. "Matt gives the line good speed. Mo (Morrison) and Nasly (Naslund) are really finding themselves."


Naslund didn't show a lot of emotion when he scored after a coon's age of not scoring, but did you see the confidence in his game after that? It's like he took a shot of crack! He took more shots from different places and got into the open a lot more. His perimeter game suddenly died. Amen. That is good to see. Now, is this new found confidence going to continue in his game? Let's hope so.
- Brendan Morrison is getting better with every game. I think he may just be what Naslund needed. Thank the good lord he is back.
- What really concerns me is how different THIS Canucks team was compared to the Canucks team that lost 2-0 to Phoenix. Did the entire team get a lobotomy yesterday?? I want to see consistency! At the same time, Phoenix played us pretty good and....what the hell happened to Dallas' defence today???
- Thank you Tippett for starting Johan Holmqvist and not Marty Turkey Turco! Holmqvist looked shaky out there and the Canucks made him pay. When Turkey went in goal in the 2nd period, he was awesome right until the end of the game. It was like he was telling his coach: "Fuck you. You should have started me tonight!"

FROM THE BLOG WORLD

Mike at the Yankee Canuck live-blogged the game in Mikey fashion. 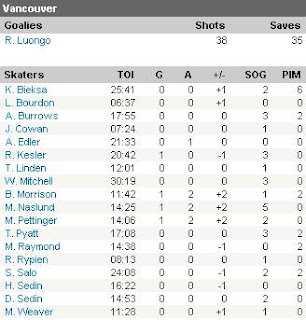