Share All sharing options for: Remembering a lamentable week 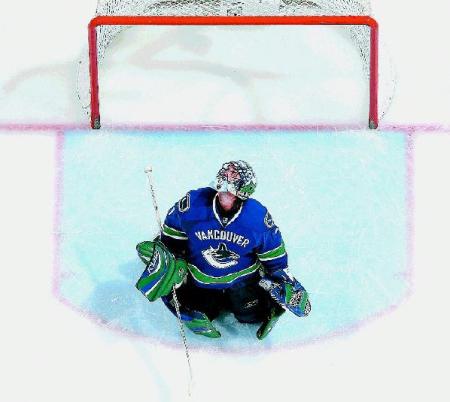 If you were under a rock this past week and wanted to know what's up in Vancouver land, permit me to assist:

1. They had a decent winning streak, culminating in a 4-1 drubbing of the NHL-best Red Wings last Saturday. Fans and pundits were quite happy that things were on the up and up finally.

2. Trade deadline day rolled around and we found out that Dave Nonis is just so punch drunk in love with his roster that he figured the only thing separating his boys from dancing around with the Cup in the spring is...you guessed it...Matt Pettinger.

3. The Pettinger era stumbled out of the gate when the Canucks couldn't close the door on the Avalanche on Wednesday. Sakic scored late and in the OT and Luongo does what we all secretly desire to do all too often with this squad: call them out for playing like shit.

4. The Blue Jackets strolled into town on Friday and inexplicitly stole a win from Vancouver, marking the first time this year the Canucks lost when entering the third period with the lead. The loss also marks their 10th OTL of the season, tying them for worst in the league with the Maples Leafs and Blues.

5. The Canucks took their show on the road for a Sunday matinée in the Windy City and proceed to put up, arguably, their worst effort of the season, firing a completely pathetic 10 shots at Lalime while Luongo got pulled and the Blackhawks took a well-deserved 4-1 win.

This afternoon was just awful to watch. This is a team that's supposedly trying to make the post season? Really? Must be nice in fantasy land.

With Colorado, St. Louis and Nashville on the docket this week, don't be terribly shocked if the Canucks keep this losing streak alive and well. In fact, the Canucks may have to wait for a win until next Monday against the Cloutier-backed Kings (and so help me God if this team can't beat him then they should save us all the time and forfeit now).

In case you were curious: in three games, Pettinger has no points, is -1 and has 2 SOG along with 9 PIMs. And, just to show I'm not hazing the newbie, in the same span of time Daniel had no points and was -3 while Henrik was...you guessed it...pointless and was -3.

And, one last fun fact, the Canucks are 17-19 in one goal games this season. Pretty sweet for a team that loves trying to win one goal games and they aren't very good at that either. As Cartman would say, "...that's big fat Oprah tits right there".

This has been your Vancouver Canucks for the week of February 25th. You're welcome.