The Power of Kesler Compels You

Share All sharing options for: The Power of Kesler Compels You 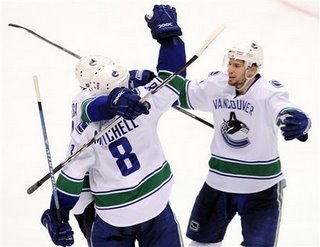 Here go the Canucks taking the Kings somewhat lightly again. Yes, they are outshooting the lousy Kings 26-12, and Cloutier is playing solid, but the quality of the shots aren't all that thrilling.
I remember now why Cloutier was so ineffective in Vancouver....he lets out so many rebounds!! Yet the Nucks are not capitalizing on them. They are passing the puck around more now, looking for a perfect play. But I'd say they should crash the net harder and look for a deflection/rebound goal. How about shooting top corner?
The Canucks are flirting with disaster tonight, as the Kings look to put a ping pong shot past Luongo and steal a win here, while the Canucks waste a game in hand.
We'll see. The 3rd is up next.

OK, so actually, Willie Mitchell breaks his stick from a point shot and the Kings break up the ice 2-on-2...Mitchell can't block the pass across and Bieksa makes a dumbass covering play and Patrick O'Sullivan makes it 1-0. You could almost see this coming. The Canucks are 11:00 away from getting swept by the worst team in the NHL. This is atrocious.
Go figure, Burrows puts the puck on net and Kesler bags a rebound goal. Why wasn't this done earlier?? 1-1. I'm less pissed off right now. The Canucks lacked desperation to win this game in regulation. They looked poised, just not desperate.

Kesler has just tipped a point shot by Willie Mitchell and the Canucks win this one 46 seconds into OT! Talk about doing things the hard way. Burrows assisted on that one too.
Amazing how the tying goal really kicked the Canucks into an extra gear and from there they buried a team they had to bury.
Can you say enough about Burrows and Kesler?
Markus Naslund had a ton of chances, but scored none.
The Sedins looked a tad better, but the one-trick pony express showed just that again tonight. Like Temujin just said to me: The Sedins are like Canadian Tire, not Ikea. They look good on the outside, but it's a low quality product." Nice one.
By the way, Bieksa IS Jovo the 2nd. I think he has a brain fart problem. I was saying earlier that they should just make him a forward.
Brendan Morrison was limited to just over 8:00 of play but showed a bit of flare.
How about Sami "Glass" Salo? He trips on Mitchell's skate, falls on his ass, and goes off with an injury. This guy is pathetic fragile. What did he injure, his glutimus maximus?
Final shots on goal in this one: 40-18 Canucks. Yeesh. Cloutier almost got his revenge. 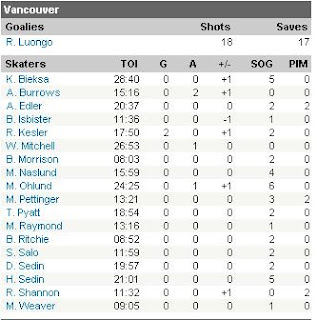