Mason Raymond out for a month

Share All sharing options for: Mason Raymond out for a month 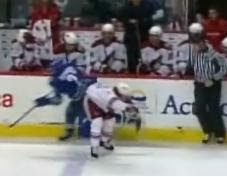 Keith Ballard's knee-on-knee hit on Mason Raymond last night has damaged Mason's MCL. He will miss 1 month of action and should be ready if the Canucks make the playoffs. The clip and the pic show it was a knee-on-knee hit, but I think it was quite unintentional by Ballard, who is known for big hits and hip checks. Thanks to commentor Peter Borgstrom for giving me this link to a clip of Ballard nailing Cam Barker with a hip check.
Vigneault didn't like it.

"In my opinion that was a vicious hit on Mason," said Vigneault. "I didn't like that at all, knee on knee, and I'm really hoping the league is going to review that."

Vicious, yes. But I'm pretty sure Ballard was trying to crunch Raymond into the boards with his hip originally.
Another injury to the Canucks. It's been quite a year for that hasn't it? Raymond had been slowing a little lately offensively, but still showed tonnes of hustle. Who is going to step into his role now? Jason Jaffray? Jannik Hansen?