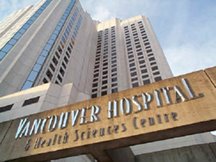 Well, there's good and bad news coming out of the Canucks' camp following last night's slaughter of the Predators.
Aaron Miller's shoulder was not separated after being hit by Jordin Tootoo. That means he won't miss much time. He will not play Saturday against the Blues, but a fully capable Mike Weaver will. That's good news. Now on to the bad news.
-Kevin Bieksa injured his wrist after his fight with Greg DeVries. I bet it was that first punch that did it. Nice overhand right. His wrist was X-rayed today, but there is no further word on his prognosis. Bieksa had a great game and it's a shame he had to hurt himself in a fight. We need him in the lineup. Save the fighting for the GOONS!
-Ryan Kesler took a shot off the foot last night and hobbled off the ice in serious pain. Then he came back. He recieved X-Rays today as well but the results are unknown, and he is qustionable for tomorrow night's game. Can't lose Kess.
-Sami "Glass" Salo is now battling the flu bug. And the bug is winning. However, he is not expected to miss Saturday's game. God, this guy is like Peter Forsberg the 2nd.
So I guess overall the news for these players isn't all that bad. Not a lot of time is going to be missed. The Canucks need to stay healthy and keep up that torrid pace that we saw against Nashville.