I'm finding it very hard to believe that the Canucks could play this poorly in such an important game. Pick any category in today's game and I bet the Hawks beat us in it.

"They wanted it more than we did," Canucks captain Markus Naslund said. "They came out hard and we didn't respond to them at all." When someone mentioned to Naslund that the Canucks only had 10 shots on goal Naslund replied:
"Ten shots on goal? That's embarrassing," he added. "Considering where we are, we should be more desperate than they are."

Well Nazzy, YOU are the damned captain. You can stand in front of the press every postgame and cry that the team isn't desperate enough. But that doesn't cut it. I want to see results on the ice from the leader. For God's sake, they may as well put the "c" on Kesler, who, along with Burrows and Shannon are the only forwards showing any heart out there. Love how Kesler yelled "fuck me" after he scored his breakaway goal. A relief for him after being the goat in the loss to the Avalanche, and also a breath of fresh air today to a team that needed a spark. Well that spark was short-lived.
Best part about tonight? After Dan Sedin coughed the puck up leading to the eventual Kane goal in the 3rd, the twins were BENCHED! About time! Send a message to these dangly little clowns that wimpy passes and plays are not going to cut it.
I think the Nucks will respond against the Avalanche on Tuesday, for one, because they are a divisional opponent and secondly because we probably won't have a playoff spot by then.-I wonder how Jonathan Toews face is after Pettinger decked him. He was leaking blood for sure.
-Just can't blame Luongo at all for the loss today. Not when your team is outshot 28-10. Luongo had no chance on any goals against.
-So the Canucks just can't match the intensity of these non-playoff teams that are on the brink.... disappointing......again.
-I sure like this Hawks squad though. Lots of North American player content. Lots of heart. Great complete game by the Hawks today. 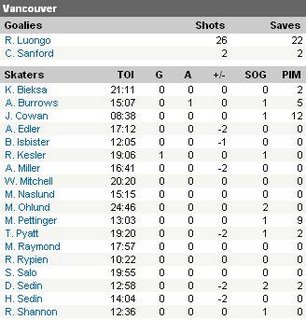