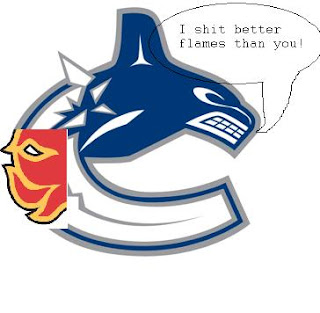 Tonight's the big night for Zanstorm, as he skytrains his candy-ass to GM Place to Canucks face the Calgary Flames. Clearly it is "Go-Time" for the Canucks. Depending on how the Preds fare against the Wings (in an essentially meaningless game for Detroit), a win tonight could be the difference between keeping pace in the race for eighth and entrenching ourselves in ninth begging for help from other teams.

Now would be a fantastic time for Bieksa to regain his form. It would also be a great time for Naslund to take this team by the balls and lead them to victory. And how about a Sedin goal that doesn't involve fluky bounces or goalie error?

More likely, it will be Luongo stealing the show while our grinder/energy guys get the job done in the trenches. When was the last time Luongo got pulled in three games within a week?

All the naysaying, doom, gloom, and frustration of the past week is forgotten. My prediction? A victory to the tune of 3-0 for the Canucks. Goals scored by Burrows, Salo, and Linden (who else?). Luongo make 35+ saves. Zany's wife drags her husbands drunken carcass onto the skytrain around 11:30pm (after hitting the Shark Club for a nightcap) and the celebration continues with a train full of rabid Canuck fans heading home jubilantly.

And we send a messager to the Predators and the Oilers:

All your 8th place are belong to us!


Update 3:00pm - Detroit beat Nashville in overtime. While this isn't the best thing for the Canucks, at least the Preds didn't get two points. The Preds now have 87 points. If the Canucks win tonight they will have 88, and their playoff fate will be in their own hands once again. A nice bonus would be a Minnesota win in regulation over the Avs. That game is starting momentarily.

Update 4:40pm - Oh Geeeez, Colorado comes back and ties it, then Rolston hits the effin' post! Grrrrr! Looks like the Wild and Avs are headed to the 3rd period all tied up.

No worries though, I just got off the phone with Zanstorm. He's got bigger concerns than the Canucks right now. His wife has spent the last seven hours at Metrotown, and now they have no gas money to drive home on Tuesday.

Donations can be sent via Paypal to: Waiting For Stanley (care of Temujin), Smithers BC, V0J 2N0

Update 5:10pm - Another puck off the goal post for the Wild. Yeeergh! It's the Spirit of Joe Sakic providing good fortune for Colorado once more.

Update 5:30pm - Marian Gaborik scores in OT... so much for the spirit of Joe Sakic, hehehe! Avs get a point, and have practically clinched their playoff spot (for all intents and purposes). They are five points ahead of the Canucks and four points up on the Preds as of this moment.


Update 6:15pm - Just heard an interesting piece of information. The Canucks have played 15 games in March (including this one), and they have traveled the night before in 14 of them. What lousy geographical luck. That's a heck of a lot of traveling, especially when you consider the teams they have played over the past month.

Also, Langkow will not be playing tonight due to personal reasons. And the Sedins will play with Naslund (according to the boys at Team 1040).

Update 6:30pm - Will probably keep updating throughout the game at the bottom of this post, for continuity. Wish I had updated it on top to begin with since it is easier for anyone reading the site, but oh well. Your mouse wheels will get a workout.

Update 7:00pm - Puck drop coming up. Gads I hate Dan Murphy, he always looks like he's had a couple of drinks with those rosey cheeks.
Of course, I just opened a beer so we'll see how this goes.

And anyone who says different is a Schmoe.

And a bottle of wine in case that isn't enough. I blame Gina Luongo.

Burrows should slap Phaneuf around like the Phucking Phairy that he is.

7:23pm - Kesler>>>>>>Iginla
Well, we know what kind of game this is gonna be... fight central. At least the Canucks are showing something.

7:27 - Hey whaddya know, we took ourselves off the PP. Great work boys.

7:28pm - Ooooh Two Flames for the price of one Pettinger! And a Two Many men penalty for the Flames! Come on Canucks, let's do it!

7:30 pm - Commercial break. I hate the fact that we're losing, but I like the intensity. Geez, this beer is tasty.

Oh, I love Salo. He is so much better than Phaneuf.


7:36pm - Well this is more like it. Canucks are flying now. Love that Burrows/Kesler/Isbister line. And another Flames penalty! Fantastic!

7:37pm - Boyd is a reckless punk. That should have been a major penalty and a game misconduct for that vile highstick.


I hate Lombardi. Waaaaaaay too fast.

7:40pm - Nice stop by Luongo on Iginla in close. The Canucks have faced the Flames three times in the post-season, and all three series' have gone to 7 games. What a fantastic rivarly. I know that nothing will ever compare to Edmonton vs Calgary, but as far as I'm concerned (from a Vancouver fans
perspective), this is one of the best rivalries in the Western Conference.

Dang, a brain cramp by Edler and now we're shorthanded. This kid has a lot of potential. More than Phaneuf, that's for sure.

7:46 - The big knock on our players that Zanstorm and I constantly harp on is that we don't block enough shots. Nice to see Ritchie getting the job done (heh, a Flames castaway). And Luongo makes another save, and Owen Nolan doesn't know whether to cry or wind his watch. Hehehehe.

Poor whiney Erikkson. That should be a diving penalty...

Oh dang, Kesler is in rough shape... and a goal... SHITTY BUZZ. And stupid Lombardi too. Figures that a late penalty kills us.

Back and Forth, Up and Down, fights, penalties, checking, offense, some good goaltending, some lousy goaltending...

A typical Canucks/Flames game. Right now I'm so jealous that Zanstorm gets to see it all at the box seats in GM Place.

Note: Beer number two opened and half empty (or is it half full?). I cannot guarantee the timeliness of the updates, but I'll do my best. Would actually like to, ya know, watch some of the game instead of staring at the computer screen...

Oh, and Naslund has surpassed his goal total of last year. That was his 25th of the year. Makes Iginla's bid for 50 look positively... errr... decent?

Tom Larscheid: This is his time of year!

8:20pm Just talked to Zanstorm, he wanted me to point out that Phaneuf is a Dick.

And Salo gets a tripping penalty... too bad.

Looking at the replay, you can see Edler knock the puck away with his glove. Ooooooh, very nice!

Larscheid: "How does he do it? He always seems to elevate his game when it's needed most!"

Hey, where did all the Flames commenters go? They've all disappeared!

And now Regher gets a penalty too!


8:30 - Third period has just started (nevermind, wtf was I thinking... it's still the second...?). My voice is going hoarse from cheers of joy. I've just cracked my third beer and HOLY SHIT now Pettinger gets into the act!!!
5-2 Canucks. What is Regehr now, a -4 tonight? Wow, where the heck has this Canucks team been the past week?

Wow, a good save by Luongo... I thought that was in for sure.

Regehr, Huselius, and Yelle are all -3 tonight. Henrick and Edler are both +3, and Trevor Linden has two goals in about six and a half minutes of ice time.

OH BIG SAVE by Joseph. Wow, that would have iced it for sure.

8:45pm - The Canucks were all over them at the end of the second period. 5-2 Canucks and I am in heaven.

Aw jeez, team 1040 has an intermission guest named John Furlong promoting the 2010 Olympics in Vancouver. He and Tom Larscheid are saying it is fitting than an ex-Olympic athlete (Trevor Linden) is playing such a big part in the game tonight. Yergh. I hate the idea of public funds (read: taxes) going towards this sort of thing. And although I'll watch the hockey games during the Olympics, I sure don't support the way it is funded. But this is what happens when the Flames player who was supposed to show up for an interview craps out! I guess Keenan doesn't want any of his players missing the shouting match in the locker room, hehehe!

Okay, I promise there will be no more political blather... unless I open this bottle of wine...

9:05pm So, does the end of the game turn into a complete mindless debacle, or do the Flames show some class and not resort to thuggery and idiocy?

Methinks it is going to be a shitshow from here on in.

9:06pm - And Regehr crashes into the glass because he's a mindless fool. An omen of his game for the entire evening...

And the tussles begin!

9:10pm - That is the feeblest holding penalty I've seen.

9:13pm - I'd like to state, for the record, that I never doubted this team for a second. I knew they had heart, and I knew deep down that they would pull out a big win tonight.

We are all Canucks. Or something.

9:15pm - Sarich is such a moron. Hellllllo Game misconduct? Yeah, no shit. That guy is a freakin tool. I love the chants of "Calgary Sucks". Led by Zanstorm, no doubt. Bwa ha ha ha.

If Linden scores a hattrick goal, I will donate $50 to Canuck Place. You know he'll get some PP time once the man advantage begins.

9:16 - well, so much for a that. Phantom hooking call on Linden. Whatever.

9:20 - The very best part of being a Canuck fan is not having to cheer for Dion Phaneuf. And where the hell is Iggy??? BENCHED BY KEENAN!!!! BWA ha ha ha ha!

9:22 - I stand by my word though, if he bags the hattie, I'll donate some cash. If Cujo really cared about the children, he'd just leave the net.

9:32 - Ahhh HAHAHA! Iginla is a sackball. Two punches to Burrows! AND BURROWS GETS A PENALTY??? Oh for cryin' out loud.

Thankfully he won't get his 50th against the Canucks.

End of the game, and I'm toasting the best Canuck player of all time.

Big thanks to everyone who checked out this monster of a post throughout the day. Thanks to the Flames fans for sticking around and commenting, especially Metrognome (I know yer cheesed off but shake it off, the Flames are in and ain't going anywhere).

Canucks are now in 8th place, one point ahead of Nashville, two points behind Calgary and three points behind Colorado. I've just heard the fans chanting Trevor's name through the radio, and I think that is a most fitting way to end this post.