Flames stink it up at the Garage!

Share All sharing options for: Flames stink it up at the Garage! 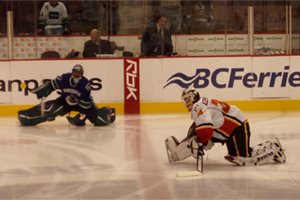 I think the Canucks wagon just loaded up again. There was screams of joy all the way down Robson Street after the game was over. There was a bagpiper playing tunes streetside while Canuck fans yelled "hey hey hey!" Good times!
Moments later my wife and myself came across Jim Hughson walking down the street. No kidding. I just said: "Hey Jim Hughson!" and that was that. I had my camera out and everything but didn't feel like bothering him because he looked like he wanted to be incognito. 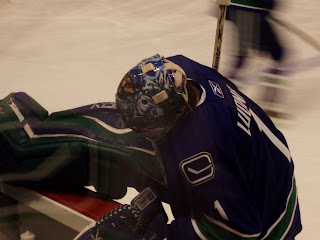 I ran into John McKeachie up in the box suite hallway as well.
Anyways, here are my thoughts of the game and everything surrounding it.
The pessimism was all over the papers and on the street today leading up to the game. There was an employee at Game On Sports in Metrotown who shared my positivity. He was the first.
The Canucks did not look pumped up during practice. They looked composed and loose. The Sedins and Edler were jabbing at eachother. Burrows fed Mitchell a perfect pass and Mitchie tipped it by Luongo, and raised his arms in the air with a big smile on his face.
Markus Naslund was the first player to finish practice, by a long shot. He left the ice early and did a lot of standing around during the warmup.
Burrows, Mitchell and Sanford stayed on the ice until all of the Lames left OUR ice surface.
There was a lot of tension in the air to start. And the Flames scoring on their first shot of the game didn't make matters any easier. I had a bad feeling after that. But the Canucks replied to both Flames leads and then just blew them away. It 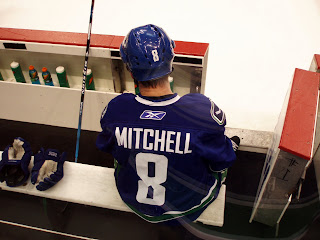 wasn't even close after they made it 2-2. The biggest difference was that Vancouver matched, and then outdid the Flames in the physical department. God knows Phaneuf came out with a vengeance tonight, but he was later silenced. Dion was stretching at center ice pregame and was eyeing the Canucks up, trying to intimidate them.
This is the style of play that makes the Canucks successful. Luongo was good, but did not have to be great. Every player was responsible defensively. You could see it all night.
Iginla who? I hardly saw much of that jackass after the second period. Same with Tanguay.
-The roar of the crowd when Kipper got pulled was hilarious.
-The roar of GM Place when Linden scored his first and then second goal of the game was spine-tingling. The Linden love is alive in Vancouver....whoa! I completely apologize for calling him washed up early last season. Do you forgive me?
-The "Calgary sucks" chants were classic.
-Vigneault called out the fans in the Province today to make some noise and give the Canucks a boost and that is exactly what happened. Great atmosphere tonight!
- Trevor Linden recieved the First Star honors and was being interviewed by the GM Place host. Only thing is, we wouldn't stop cheering and chanting his name! Hilarious! Trevor couldn't hear the questions! Even Lindy was laughing. A hero's ovation for the game's hero.
- Pat Quinn was at the game as well, and recieved a massive applause when he came up on the screen to be interviewed. People were bowing and everything. Funny shit! 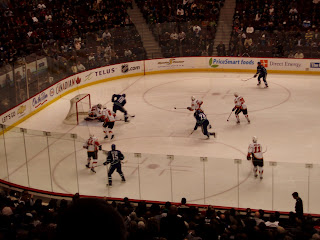 -That the most of what I remember of the experience. Oh, and I saw about 1000 jackasses in Flames jerseys going home sad after the game, and they were being taunted by Nuck fans. Ha!
-The Province had a coupon in it today that provided $40 off any adult-sized jersey at the Canucks store in GM Place, so I snagged a home jersey. Sweet stuff.
-My wife never really got why I get so riled up over hockey games, but after taking her to the game tonight she finally gets it! She had never seen anything like it!
-The Canucks' record is 4-1 now when I've been at the games. Should I attend the remaining 3 games?
Sorry, I'm heading north Tuesday morning.
-This game should be a huge momentum builder for the Canucks. They played so well, dispensing of the rumor (by a jackass Province reporter) that maybe they were tuning Alain Vigneault out, and they have silenced the nay-sayers as well for the time being. All I can say to Nuck fans is: if you're attending any of the next 3 games, go ape shit. Be loud and supportive. The team feeds off it.
-I shot some decent photos tonight and have included them in this post.
-Mad props to Temujin for his live blog on here tonight. I laughed reading through it when I got 'home' post game. Funny how the Flame fans disappeared quicker than Cujo's career in the comment section after the Canucks left the bastards in the dirt! 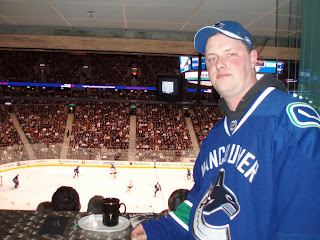 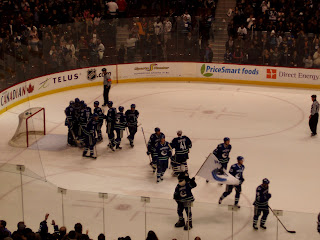