Share All sharing options for: Canucks now sit and wait until Tuesday night 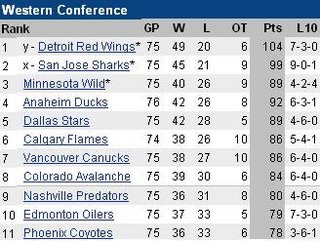 (The standings are as of Saturday morning.)
I didn't get a chance to catch the Canucks-Wild game last night as I was at work. But that was a blown chance to take over the Northwest Division lead. The Wild now sit 3 points ahead of Vancouver. It's a long break between now and Tuesday, where they play the Flames.
Between now and then:
-the Flames play the Wild and the Avalanche.
-the Avalanche play the Oilers and obviously, the Flames.
-the Stars play the Kings.
-the Predators play the Hawks early today.
So the face of the West can change a fair bit before the Nucks play again.
Are the Preds going to oust somebody in the next 2 weeks? Is the Oilers' recent surge just plain old futile? Can the Avalanche continue to press forward through adversity? Nice to see Adam Foote go home with a hip injury. Geeziz. Glass Joe lives!
We would currently play the Sharks if the playoffs started now. To that I say: "No frickin' thanks." The Sharks have beat us all 4 games this year, I believe. I'm picking the Sharks to make it to the Finals this year. I'd rather see the Nucks play Detroit or Dallas. Just no Ducks and Sharks. Someone else can play them first.