Canucks must rebound tonight against the Coyotes

Share All sharing options for: Canucks must rebound tonight against the Coyotes 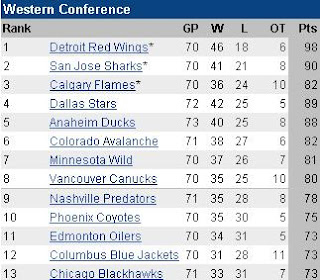 But rebounding against the Coyotes will not be an easy task. Phoenix is fighting hard for a playoff spot and is 5 points out of 8th. Coach Gretzky recently said:

"We’re battling for our lives now, we know that…We know we have our work cut out for us, but we’re not out of this by any means. Nobody in our locker room is gonna throw in the towel."

And they won't. Backed by a top goalie in Ilya Bryzgalov, this team, although inconsistent, can compete with the big dogs and are not to be taken lightly.
The Canucks will look for a more consistent start tonight. They came out of the gate flying against the Ducks, but then took most of the rest of the night off. I know Luongo wants to play in every game, but maybe Sanford should start tonight. That would not only send a message to Louie to sharpen up, but the rest of the team as well. But that likely won't happen in such a crucial game.
These teams have split their season series with a win each. Each game was only won by one goal. Tonight begins the second half of the season series between these 2, as the Coyotes will play Vancouver again at the Garage on the 17th (next Monday).
To prove Phoenix's inconsistency check out their last 5 games.
11/03/2008 ANA 2 @ PHX 3
08/03/2008 OTT 4 @ PHX 2
06/03/2008 MTL 4 @ PHX 2
05/03/2008 PHX 2 @ DAL 1
01/03/2008 CGY 3 @ PHX 1
2 wins in their last 5, but they can show up and compete with the Ducks and Stars. 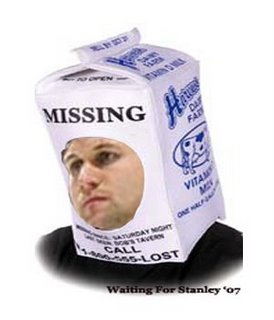 The Sedins looked a little better last night, but couldn't make it count on the scoresheet. Naslund was invisible for most of the night.
Regardless, I'm guessing that one of the 3 scores tonight. I say the Canucks take this hard-fought game 2-1 in the shootout, with Alex Burrows netting the winner. This game could be a snoozer offensively, with not too many goals scored on either netminder. I'm on a bit of a roll predicting winning scores and teams. Anybody wanna top my guess?

I will be semi-live blogging this game tonight, in 10-minute segments of each period. My opinionated side is really going to come out tonight I'm sure.

Who to watch for:
Shane Doan. He has 2 goals and 5 assists in his last 5 games against Vancouver.
Peter Mueller. Wears #88 and looks like a bigger Patrick Kane out there. He's got skills and is one of my fave rookies this year.
Ilya Bryzgalov. I can't remember the last time I saw an acquired goalie make such an amazing impact on a team. Breezie is damned good, which could be bad news for a Canucks team that can't score many goals lately. Vancouver will have to screen him and deflect shots from the point...try get him off his amazing game.

Sad news....according to JJ at Canucks Hockey Blog, this will be Jim Hughson's final season as a Sportsnet play-by-play guy. He is being swept up long-term to replace Bob Cole apparently. Who will replace Hughson? My guess is Shorthouse. Check out JJ's site for the rest of the story.