Canucks kick the Hell out of Clawless Predators 6-2

Share All sharing options for: Canucks kick the Hell out of Clawless Predators 6-2 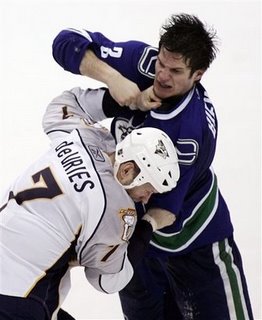 5 goals scored in the first 6:21 of the game...madness. The Canucks jumped to 2 goal leads only to have Luongo choke, allowing 2 goals and putting the Preds within 1 goal TWICE. But then the game settled down....for the Canucks not Nashville. The Preds looked uncharacteristically sluggish and sloppy in their own zone and the Canucks made them pay dearly, leading 4-2 after the first period. Vancouver outshot Nashville 24-9 in the first period alone, and 44-23 overall.
The Preds just couldn't get anything going, and whenever they did after the 6:21 mark of the 1st, Luongo stopped them. The Canucks showed the hustle and scoring touch that we have been waiting for over the 4 game losing skid. And now, like Jim Hughson said: "You can all jump back on the bandwagon now."
-The Sedins were on a tear tonight and that was good to see. But Nashville gave them a lot of room. I guess they didn't read the scouting report.
-Naslund is either nursing an undisclosed injury, or lacks heart out there.
-The Shannon-Raymond-Pettinger line is quick and effective. Love it.
-Alex Burrows is a beast. He is finally finding the net to compliment his excellent checking and badgering skills.
-No word on Aaron Miller's condition yet, but that looked like a separated shoulder after that reject Tootoo crushed him into the boards. Miller could be out 2 months if that's the case. Looks like Mike Weaver is going to get some playing time. Vigneault didn't like the hit.

I didn't see how many strides Tootit took, but he sure was going fast. I didn't mind the hit, but the way he cowered from a fight afterwards was just gutless. Tootoo is a piece of junk. And then he cross checks Bourdon up high as Luc came at the jackass to offer up some retribution. Tootoo=classless trash.
-See? Luc Bourdon did not look out of place at all. Ohlund who? Bourdon only played 13:33 though. He could play more.
-This was the Bieksa we've been waiting to see. Great game by the Bieksallent one.
-Byron Ritchie doesn't get much praise, but his return tonight was somewhat of a spark to the team as well. An excellent penalty killer and forechecker. One of my faves.
-Loved that Mason Raymond goal. Smithers' own Dan Hamhuis coughed the puck up and Mason made him pay, scoring a wrap around goal getting his own rebound. I was thinking that that play reminded me of Jan Bulis a little. Only, Jan Bulis would have miss the open cage.
-A Canucks win...a Coyotes loss.....Canucks move into 8th place....a bunch of money was raised in the Canucks For Kids Fund Telethon....John Bollwitt was spotted behind Dan Murphy post game......yeah I'd say it was a good night.