Are you scoreboard watching? Prior to this game, the Flames have lost 6-4 to Atlanta, the Kings are beating the Predators 3-1 in the 3rd, and the Wild blew a lead over the Devils and they are tied at 3. The sea once again parts for Vancouver. Now is our big chance to put 4 points between us and 9th spot and more importantly, take over the Northwest Division. I guess the Oilers will have to beat the Avs as well to 'help us out.'

The Coyotes came storming out of the gates, outshooting the Canucks 5-0 before Nick Boynton took a penalty and changed the momentum a bit. Luongo looks sharp so far, and that is a good sign, after getting pulled in last night's game against the Ducks.
Shots through the first 10 minutes: Coyotes 11 Canucks 2.
---------------------------------------------------
Did you see how Naslund acted after Jovo tagged Morrison? He stood in between the Canucks and Jovo and went into Jovo's face like a ref would and told him to stop the roughing. That's not cool. He should have popped him one. Nazzy is too passive. He reminds me of Jesus I think. 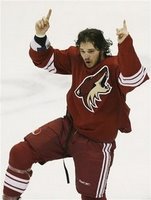 There's a lot of emotion in this game. With just under 3:00 left, Alex Burrows fought Mad Man Dan Carcillo and got beat up. But at least he refused to quit. But now we've lost our new-found sniper to a major penalty. In that scrum, Kesler also managed to get a 10-minute misconduct. Sucky, these are the wrong guys to lose in a game, but that is the way they play.
This is not the start the Canucks needed. They were outshot 24-7 in the first period. The Coyotes are doing what I wanted to see the Canucks do more of: shoot the puck more and crash the net. They'll need a serious pep talk from Viggy to spark them.
-Damned Wild got a point against the Devils because it went to a shootout and they lost. Boo....The Oilers are down 3-1 to the Avs early. Damned Coilers. The Preds did lose the Kings, so thank you L.A.

Niko Kapanen has just scored with just under 10:00 left in the period. A powerplay goal. The Canucks had outshot the Coyotes 5-1 until the PP happened. But Vancouver still isn't shooting enough. They are trying for the perfect play repeatedly. Wasteful, because now the Dogs are leading 1-0, and the Dogs look like the more desperate team.
------------------
The Canucks absolutely squandered a powerplay opportunity with about 4:00 left in the 2nd. They just couldn't click. At least they started to shoot the puck more after that. Bryzgalov is having an easy night and Luongo is getting no support from his squad. Now that Kesler and Burrows are more available, I expect them to be a factor in the 3rd. God knows the Swedes and Pyatt are not going to get it done. They look and ACT like their are slumping. They over-pass the puck, fumble the biscuit and don't shoot enough. At least Naslund is TRYING, and he is back checking well.

The Coyotes are keeping the Canucks to the outside in their zone. I guess that makes it tough to crash the net or get the shots and passes through. Notice how many shots the Coyotes block?
Shots in the 2nd: Canucks 12 Coyotes 6
Shots after 2 periods: Coyotes 30 Canucks 19

The Coyotes have just scored to make it 2-0 with 12 and a half minutes left. Hank the Stank Sedin coughed the puck up just outside the Canucks' zone and the Coyotes broke in and scored. Dan Winnik from Hanzal. The Sedins continue to struggle offensively and now defensively. As a result, Vigneault has split them up. Not like that's going to help. They'll suffer from separation anxiety. Jesus! Just bench the dweebs!
The shots in the 3rd were 5-1 Dogs up to the goal, mostly because the Nucks had to kill 2 penalties. Just not a good road game by Vancouver tonight.
-I'd complain about the call on Bourdon for hooking on Doan, as it was a couple love taps, but then Mason Raymond just sold a hook on Derek Morris with 7:00 left.
-Canucks went 0-for5 on the PP tonight.
-Proof that Naslund has no confidence? Burrows and Markus just broke in 2 on 1 with only a few minutes left. Burrows passed it to Naslund, who hesitated before he shot it, giving Bryzgalov time to move across and stop it. The old Naslund would one-time and bury it.
-The Coyotes are now in the hunt, only 3 points out of the 8th spot.
-It doesn't get any easier for the Nucks. They play in Dallas on Saturday. Like Jim Hughson said in the dying seconds: the roller coaster ride Canucks season continues....

Best Canucks of the game:
1. Luongo. Poor Louie, he brought his game tonight. not many of his teammates did.
2. Markus Naslund. Struggling, but managed 7 shots in 16:46 played.
3. Fill in the blank.