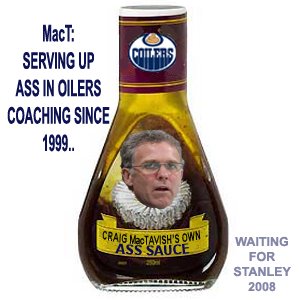 After a character win over the Coyotes this week that narrowed the Coyotes' playoff hopes, the Canucks have a chance to do the same thing to the Oilers tonight in Edmonton. The Oilers are in 10th spot in the West right now, 5 points behind the 8th place Avalanche. But the Oilers will be no easy task. They are 8-2-0 in their last 10 games and are about the 3rd hottest team in the NHL over that span of games. A win over Edmonton would put the Canucks 6 points ahead of 9th place Nashville. That's a lot of breathing room with not many games left.
Oilers' goalie Matthieu Garon had played so well for Edmonton in recent months that a shakey Dwayne Roloson rode the pine for a long time. But that has changed. Garon cooled off in a 5-1 loss to the Avs on March 13th, and Roloson has been red hot over the past 3 games, all wins.

"We were in a pretty bad situation not too long ago and made a commitment to each other and everybody has followed through with it," defenseman Steve Staios said. "We weren't feeling that good about how we were playing but no one went into panic mode. We had confidence that if we got back to our game that we could make a run."

This will be one tough challenge indeed.
The Canucks are coming off 2 inspiring wins, with Roberto Luongo being on his game and the players that were mired in slumps scoring again. That can only mean good things.
The bad news is that Mason Raymond will miss a month with an MCL injury. Aaron Miller may be out longer than anticipated with his shoulder injury, as it is not progressing well, but word is he wants to wait until the offseason for surgery.
Ryan Shannon will fill in nicely in Raymond's abscence. Mike Weaver lacks Miller's size, but more than makes up for it with his smart and steady defensive play.
The Oilers are missing Geoff Sanderson, Ethan Moreau, Shaun Horcoff, Sheldon Sourray and Fag Boy Raffi Torres. Yet they continue to win with their explosive youth. That's called good drafting folks.
The last time these 2 teams played it was a bloodbath brawl (video). There should have been a steel cage around the rink.
Expect the same intensity and anger tonight. Hopefully no more Canucks get hurt. Who wants to make a bet that Sami "Glass" Salo gets injured tonight?
Should be a beauty. My prediction is that the desperate Oilers beat us 3-2 in a shootout tonight. The Nucks are 4 points up on 9th and I expect the Oilers will show more desperation because they HAVE TO.

As a side note, I am hearing that Mr. Festinger, VP of Canucks business mentioned on Team 1040 today that some Canucks PPV games will be in High Definition next season. Apparently, watching PPV games will increase to $15 per game. Fuck off! Better get rid of McEwen and Russell then.