Canucks 3 Coyotes 1: Hank is no longer the Stank

Share All sharing options for: Canucks 3 Coyotes 1: Hank is no longer the Stank 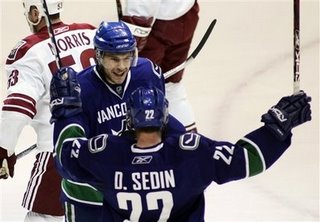 The scenario just keeps getting better and better for Vancouver...and at the right time. With 10 games left, the Canucks schooled a Phoenix team that HAD to win and pretty much screwed Gretzky's teams' chances of making the playoffs. But more importantly, the Canucks moved into 7th spot in the West and created a 4 point gap between themselves and the Predators, who are now sweating in 9th spot.
The Sedins finally broke out!!! Henrik scored TWICE and his brother had many chances, didn't capitalize, yet had 2 assists. Even Taylor Pyatt broke out of a (what was it?) 18 game scoring slump? It is great to see these guys break out at such an important time of the year. Once again, you could see the giant apes being lifted off Hank and Pyatt's shoulders as they finally bagged a goal.
It's good times for a Canucks team that seems to be getting all of their ducks in a row except for ONE THING: Defensive consistency. There were a few momentary lapses in reason on defence but regardless, an improvement.
I'm sorry, but Bieksa+suck=Bieksuck. He has not found his game yet and continued his follies. I don't care if he had 2 assists, he needs to tighten up defensively and make right plays at right times.
Aside from that, Gretzky has more grey hairs after tonight and the Canucks look poised to make some noise as they play their last 9 games against Northwest Division rivals. NOW is where it really counts.
I am liking the coaching ability of the Vigneault. Splitting up the Sedins 5-on-5 and playing them together 4-on-4 and on the power play is brilliant and is paying dividends.

Damn it! The 3M line got better as the game went along but didn't deliver quite as expected.

That was a knee-on-knee by Ballard on Raymond, but I think it was unintentional because he was going for the hip check. I don't think Mason will miss any time.

I just want to give a shout out to Dan Carcillo right now. Thanks for being so good and entertaining earlier in the game and then letting your true low-IQ colors show in the 2nd half of the game.

A blunt question: Where the fuck did Canucks PPV TV find Craig McEwen? In the slums? How the hell did he get a job on TV?? Terrible.

Happy St. Patrick's Day, but there was no luck involved in tonight's game. The Canucks had the skills.

1. Henrik Sedin. It's about fucking time.
2. Willie Mitchell. Over 28 minutes played and he was solid.
3. Dan Sedin. 6 shots, no goals, but IMPROVEMENT. 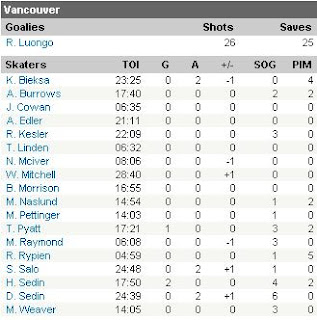