Bad news for the Canucks as they play Nashville tonight

Share All sharing options for: Bad news for the Canucks as they play Nashville tonight 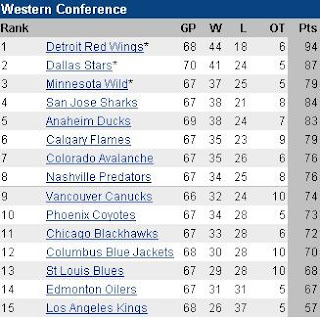 Good lord. The Canucks' season has yet another obstacle to climb, as it has been discovered that Mattias Ohlund has bone chips in his knee. According to TSN:

He will then be given four to six days to see if the swelling has gone down (using anti-inflammatory drugs) enough to return to play.
If Ohlund has not recovered enough to play at that time he will undergo arthroscopic surgery, ending his season. It is unsure if Ohlund would be available to the Canucks during the playoffs.

Luc Bourdon has been recalled to take Ohlund's spot.
While I like Ohlund's stability on the blueline, he can't hit the net with his shots.....at all. I was getting sick of seeing his point shots miss the net. Bourdon won't do that. Luc will add some youth to the blueline and maybe some LIFE, which the Canucks could use more of in their game. Bourdon has filled in masterfully earlier this season when the Canucks' blueline was depleted. So I'm not worried about the loss of Ohlund.
I'm just wondering what it is going to take to have a fire lit under several Canucks players' asses in order to play with some desire. Desire to actually make the playoffs. As you can see from the current standings, a loss in regulation against the Predators tonight will put them in danger of dropping down to 11th spot behind the Coyotes and Black Hawks if those 2 teams win their next games. Both the Hawks and Dogs are starting to roll.
The Canucks are trying to avoid losing their 5th straight game tonight. They haven't lost 5 straight in about 2 years. A regular win puts Vanouver ahead of Nashville with 1 game in hand and puts them within 3 points of Calgary and Minnesota.
To be honest here, like a friend of mine mentioned today, which team in the top 8 in the West is the most likely to fall out of playoff contention? The Predators are better than I thought. The Avalanche have Forsberg to rejuvenate the team and a Jose Theodore that has returned to form. I don't see Calgary falling out either. At least 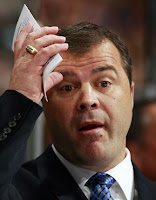 these teams know how to put the puck in the net. The Canucks don't. And it all starts with the Sedin twins and Naslund. What do they have...3 combined points in the last 4 games? SUCKY!
It all adds up to having a few drinks before the game just in case it stings too much. Best case scenario is a win, and then the alcohol buzz feels even better.
The Canucks beat the Preds 2-1 in the shootout a couple weeks back. But they surrendered 51 shots. Luongo was God.
I'm still on the positive wagon. I say the Nucks pick their game up and beat the Predators 2-1 tonight.

-It's amazing how many Canucks fans that I talk to that say they are not watching the team anymore. They'd rather watch CSI or whatever else. I think that is a tad premature. -

As a side note....wouldn't it have been nice to pick up Mark Recchi off waivers earlier in the year? His leadership, scoring touch, and grit would be really useful right now. Plus he's a BC boy. Hindsight is 20/20 hey Nonis?