Are the Canucks Contenders?

Share All sharing options for: Are the Canucks Contenders? 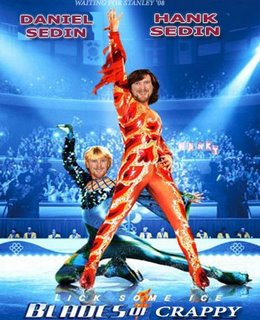 It's very difficult to believe that this Canucks squad has even a small chance of being a contender this year. It's getting hard to believe that they will even make the playoffs. Blown 3rd period leads to go along with losing to lowly Columbus and Chicago recently provide obvious evidence that this club is lacking in intensity and is not playing at the level that was expected of them.
With the trade deadline being over, this current lackluster play is causing people to point fingers at Dave Nonis, wondering why he didn't pull off a more significant deal to land a Brad Richards-calibre player. Well I'm not buying into that. That's hindsight talking. This team should be better than it is-as it is.
Certain players on this team need to step it up. Unfortunately, these players are of Swedish descent. Naslund and especially the Sedins are getting paid to be the offensive leaders and are not getting the job done. When they don't score, we seldom win. It seems that the scouting report is League-wide on these guys: play them hard, knock them on their asses, and the shy trio backs off into the shadows. On top of that, the twins are off their game now. Their passes are not connecting. They are struggling. A costly giveaway by one of them yesterday led to Patrick Kane's second goal of the night and the killer 4-1 goal. Vigneault finally had enough and benched the ineffective duo. FINALLY. For a coach who rewards players who play well, I thought that the Sedins were given a free pass way too often lately. But when you don't get secondary scoring and you are behind in a game, how can you bench them? It's almost a lose-lose situation sometimes.
Ah yes. Viggy's is doing the best with what he's got. That is why I can't wait until this summer. There is no doubt that Naslund will either retire or jet for money elsewhere. The same may apply to Brendan Morrison. That is $9.2 million saved right there. Spread that money out and you can buy yourself a decent top line through free agency. You could make a Michael Ryder-Darcy Tucker-Derek Roy line with that kind of money, as an example. Imagine the possibilities. And that could be your new top line. Why is that a good thing? Because it would put the Sedins as the 2nd line, away from the spotlight and away from opposing teams' checking lines. I think the twins would play better out of the spotlight. 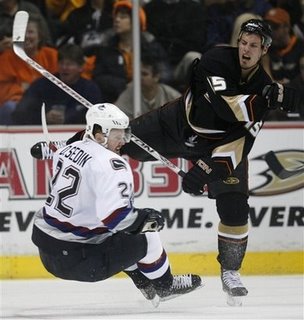 I also think the Sedins should bulk up a little. I'm not seeing their strength coming out anymore. I'm seeing fancy-dangly "I'm a superstar" passes from them and it's infuriating me. Let's see some grit from these guys. Canucks.com lists Dank Sedin at 6'1" and 185 pounds and Hank at 6'2" 190 pounds. Shit, I weighed that in high school and I'm 6'2". Scrawny. These guys gotta bulk up. Even in 2004 they said:

"It's clearly a game of men over here," Henrik said.
"We saw the difference in our strength vs. theirs right away," said Daniel.
"It's been one summer of working out after another since we arrived in 2000," Henrik said.
"And we still get physically abused on a lot of nights," Daniel adds.

Alright, so pound the weights more often and eat more Sedish meatballs then!!!
The Twins were very vocal after the Ducks series last year.


"I've heard it all before, it doesn't bother me at all. But it's just wrong," Daniel said. "We played two playoff series against two tough teams, really tough teams. But there was no hitting on us. I don't think I got hit once in the playoffs. How are we soft then? I don't know.
But I know how far we've come. I know how we were in the first two years and I know where we are now. We've come a long way."


Alright...prove it NOW when we need you the most.

Henrik had a few words to offer as well:

"A lot of these 'experts' come out and say we're perimeter players," Henrik said. "They're the same people who said we'd be nothing more than decent third-line forwards.
We're not perimeter players. We like to cycle, we like to hold on to the puck, but once there's a chance to go to the net, we're right there going to the hard areas.
We're confident we're playoff players and this result is only going to make us work harder this summer to come back stronger."

The reality here is that the defence is big enough, but the offence is not. At least, not where it needs to be... and that is on the scoring lines. We need a few more Ryan Keslers and Taylor Pyatts with better hands and more consistency. But we don't have it. And that is why the Sedins' bold promise after last year's second round exit to Anaheim that they would "be better" doesn't seem to hold a lot of water. They are not big enough to handle the grind.
Nah, it looks like we could make the playoffs and then go as far as Luongo will take us. That's not fair. Louie needs some support once in a while, and he's not getting it right now. This team, given it's lack of scoring depth, needs to win 2-1 games on a more consistent basis. That means the team defence is going to have to get a lot more consistent...and fast.
As a side note, I am wondering if Bieksa's return was really worth it. He doesn't seem right somehow.
Secondly, what will be the effect of Brendan Morrison's return? It's GOT to help, right? Can I get an amen? Or just a bunch of finger crossing? It's alright, I don't feel too confident with this bunch right now either.
I know it's pessimistic to say this, but I really doubt this team has the sandpaper and scoring depth to even get past round 1 this year. It will take more offensive contributions from Pyatt, Shannon, Raymond, Kesler and Burrows to pull off a cinderella story. And it will take the Swedes to play more of a Canadian style physical game to not only create space for themselves to score, but also drive to the net and create more opportunities.
I see the Canuck fan frustration is widespread. Jes is ranting as well.