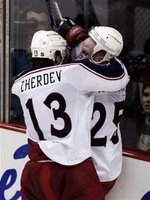 OK, maybe not quite that yet. But blowing a 2 goal lead and losing for the first time all year when leading after 2 periods is a cause for concern.
-Bieksa's terrible coverage of Chimera the Canucks killer on the Overtime goal was cause for concern. Bieksa has been known for defensive errors. I miss Krajicek aready!
-If the Sedins played with the heart of Shannon or Raymond we'd be a lot better off. It's time for the coach to call these guys out. When they don't score, we often don't win. They are the go-to guys. Time to step it up.
-Playing non-playoff teams that are playing with desperation will be a theme this month. If the Canucks don't get it together and stop blowing 3rd period leads, they will be on the outside looking in REAL QUICK. Tonight we just watch and see if the Nucks get bounced out of a playoff spot, and then they have to bury the Hawks tomorrow afternoon, end of story.
"

We’re going to step on the ice on Sunday afternoon in Chicago and we’re going to play hard," said Alain Vigneault post game last night. "It was a tough game to play tonight, they’re a team that checks really well and there’s not a lot of room; they battled hard. We could of made it 3-0 but we didn’t get that goal, we got another game on Sunday and we going to get ready for it as a group and play hard."