Share All sharing options for: Who's knocking Patrick Lalime now? 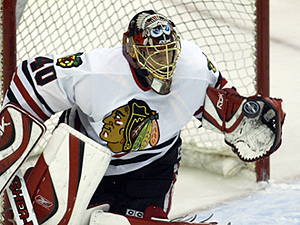 I agree with Kelly Hrudey, who said last night on After Hours that he really enjoys comeback stories. And Patrick Lalime is one of them. It took a while for Lalime to get a steady job with the Sens, but when he did, by 2002 he helped them get past Round 1 in 5 games over Philadelphia, allowing only 2 goals in the process. The Sens were then beaten in 7 games by the Leafs in Round 2.
The following season, Lalime played more games than the previous season (67) and won 39 games, had 8 shutouts, a .911 save percentage and a 2.16 goals against average. The Sens and Lalime made a serious push for the Cup in that season, defeating the Islanders in 5 games in Round 1 (Lalime allowed 7 goals), the Flyers in 6 games in Round 2 (Lalime allowed 10 goals), and then losing to the Devils in 7 games in the Semi-Finals (Lalime allowed 17 goals). The losing goal in game 7 in the Devils series came off the stick of Jeff Friesen who buried a shot past Lalime that he had no chance on. It was more bad Ottawa defence than anything else.
That was the best that Lalime had to offer for the Sens, as he played less games for the Sens the following year (57) and his stats dropped. The Sens were buried in the first round by the Leafs in 7 games, Lalime was pulled from the net in Game 7 after the first period after letting in 2 soft goals by Joe Nieuwendyk. He never played another game with Ottawa. Then-Sens GM John Muckler said:

"I thought Patrick Lalime performed pretty well for us and this is tough because of the type of character that Patrick Lalime is," said Muckler. "But the reality is if Patrick Lalime came back next year the pressure on him would have been tremendous.
We want to win a Stanley Cup in Ottawa and we have to make moves we feel can help us. I have no doubt in my mind that Patrick will go to St. Louis and have success. I just think we needed to make changes because we haven't had success in the past. With this move, and trading Radek Bonk (on Saturday), it gives us options to make other moves."


Dominic Hasek was brought in to address Ottawa's 'goaltending issues' and we all know how well that went.
He was then traded to the Blues in June 2004 for a conditional 4th round pick in 2005.
Lalime must have lost a lot of confidence by then, (plus playing for a gutted Blues team) because he only won 4 games out of 31 games played and his stats crumbled to a 3.64 GAA and a .881 save percentage. He was sent to the minors and also tore his ACL.
The Blues let Lalime go to unrestricted free agency in July 2006, and Chicago picked him up. Much like the Blues situation, Lalime walked into a Hawks team that was in disarray. Not even Luongo could have saved that mess last year in Chicago. His Hawks debut had to wait a few months because he needed back surgery.
This season? Things are looking up for St. Patrick the 2nd (his idol is Patrick Roy). With the ongoing injuries to Nicolai Khabibulin, Lalime is seeing playing time and performing well. He has 10 wins in 20 games, a 2.40 GAA and a .907 save percentage. Lalime and the Hawks have won 6 of their last 8 games. Lalime has allowed only 14 goals in that span. It doesn't hurt that the Hawks play that much better with Jonathan Toews in the lineup.
These are better times for Lalime, and I am happy for him. He has come a long way in the past few years, and is becoming a great comeback story.

A lot of these stats have come from Hockey Goalies.org.