Sundin should waive his no-trade clause

Share All sharing options for: Sundin should waive his no-trade clause 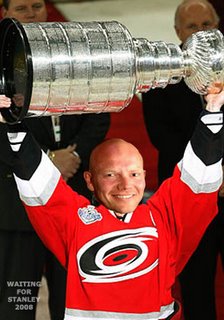 I was reading a great piece last week from Dave Hodge I believe and it really spoke truth. Why isn't Mats Sundin waiving his no-trade clause? Does he not want to relocate for several months to join a contending team? Is he doing the "loyal - go down with the sinking ship" thingy? At 37 years of age, and with the Leafs looking to rebuild, Sundin may never see a Stanley Cup playing for the Leafs. If he doesn't jump to a contending team now, what does that say about his desire to win a Cup? Is it even there?
A second big point is: if Sundin really cares about the well-being of the Leafs franchise, then he should waive his no-trade, giving the Leafs a bunch of high prospects in return, stabilizing their future, and then he can re-sign with Toronto in the summer. Shouldn't this be the mentality of the Leafs' captain? Do you agree?
Cliff Fletcher had met with Sundin yesterday about the matter, but Sundin has not provided an answer yet. Apparently, Fletcher also did the same with Bryan McCabe.
Fletcher won't wait until the last minute to trade Mats, out of respect.

"Mats is such a big, important part of this team," Fletcher said "You don't think we're going to drop something on Mats at five-to-three on Tuesday afternoon? That's not the way I do business."

With the Leafs being so far away from making a playoff spot, Mats may just waive his no-trade yet. Know where I think he's going/would fit in? Carolina. The Canes lost their captain Rod Brind'Amour to a season-ending injury, are leading their division, and could use Sundin's leadership and scoring at center. It wouldn't be that far of a move for Mats.
Sundin is still my fave player, and has been for years. I wouldn't mind seeing him at least get a decent shot at hoisting the Cup once in his career.

Check out the interview with Mats this morning (Saturday). He's saying all the right things. But in a sense he did tip his hat and question if it is HIS responsibility to waive his no-trade clause and make the team better for the future. He said that he is unsure if he's even going to play after this season, and that plays into his decision.
I still think he should waive the no trade, because it looks to me like he doesn't truly want to win a Cup when he says he doesn't want to go anywhere else.