Sudden anger is a beautiful thing

Share All sharing options for: Sudden anger is a beautiful thing 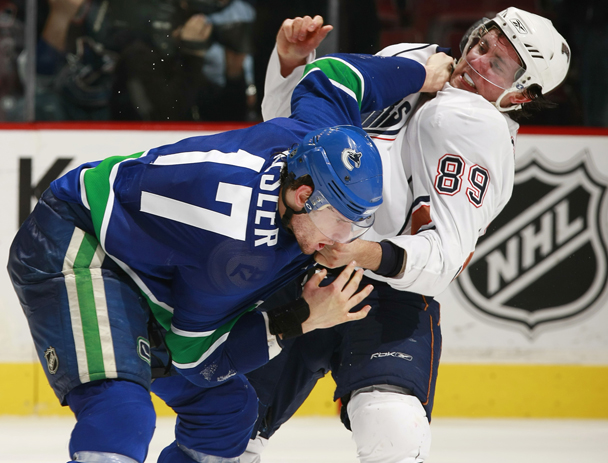 Before Saturday night gets too far away from us, a word about the sudden escalation in the level of anger and aggression of these Vancouver Canucks: it's about time.

I've said (twice in fact) that I wanted to see some level of emotion or, better yet, pure unadulterated anger from this team; something to show they have more then a passing apathy at their steady stream of post-xmas losses and letdowns. I didn't know it was going to take the Oilers to do it, but considering the latter has a lot to prove on their own and have their own young crop of guys willing to answer the call (Gagner, Cogliano, Brodziak, Gilbert & Stortini) I guess it makes sense.

In a game where Cowan and McIver were both sitting, I was pretty amazed at how much Vancouver didn't take much shit from Edmonton. You can normally expect Kesler, Burrows and Cooke to annoy the hell out of the opponents, but raise your hand if you thought guys like Weaver, Raymond and even Linden would be getting involved in the rough stuff (and was Willie Mitchell basically giggling as he held off Brodziak in that final ten seconds?)? Not to be forgotten in this was that Naslund and the Sedins took the Oilers apart again and that third goal was a thing of beauty.

As I watched the Devils make easy work of the Hurricanes this afternoon, Mike Emrick noted that a Vancouver scout was at the game to possibly scout Brookbank along with some others. Adding some muscle by the end of the next week certainly would be an easier thing for Nonis to accomplish in lieu of landing Sundin or someone else. And if he does go that route doesn't that make the aforementioned easily scratchable Cowan expendable?

The next five games are simply massive: the Wild, Predators, Wings, Avs and the Blue Jackets. They are either behind or trying to keep pace with all of these guys; if the Edmonton game is going to give them momentum, this is an ideal stretch for it.