Should the Panthers - Sabres game have been stopped after Zednik's injury?

Share All sharing options for: Should the Panthers - Sabres game have been stopped after Zednik's injury? 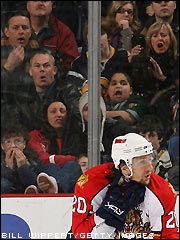 I think the officials handled the situation properly last night. They delayed the game until an announcement was made that Zednik was in stable condition and on his way to the hospital. Sure, the players may have been shaken up by it and maybe didn't quite feel as competitive afterwards, but accidents happen in hockey. Some are more disturbing or graphic in nature. But the game must go on. Just saying.
Good to see the officials make the right call last night. I'm glad Zednik is alright.
A major thumbs down to that piece of dog shit reporter who asked Jokinen (who's skate cut Zednik) what he was thinking or how he felt post game. Jokinen's face turned to rage and he said "What kind of fucking question is that?!"
No kidding. That reporter is an asshat.

The truly most disturbing came from FSN. Shades of Clint Malarchuk. I can't believe that these incidences don't happen more often.