Good news: it's less then 24 hours from being over. Not that I am counting. But I am. Kinda.

I should clarify: I do like the idea that teams can change their makeup and appearance very quickly. But then again, as the Courier Post notes, only one player of the 91 guys who swapped zip codes last year technically got his name on the Cup: Brad May. So yeah it's fun but you know that likely not that much will change for probably 25 teams when it's all said and done.

And what of Vancouver tomorrow? The normally stingy Canucks rarely (ever?) do something amazing at the trade deadline. This time last year they did a whole lot of nothing. Sure, they thought Smokes and Sopel were solid, but really...ugh...don't get me started on Sopel. If he somehow ends up back on this team tomorrow, I quit as a fan to follow ice dancing for the rest of my days.

Since I have no secret insiders to any negotiations (instead of the natural voices in my head) this is what I am hoping for when the smoke clears:

What can leave: The rights to Morrison, Bourdon, Grabner, Schneider, Burrows, Miller and the 2-4 picks.
What cannot leave: Edler (a thousand times Edler), Kesler, Jaffray, Raymond, Naslund or the first pick
What is welcome: (...inhale...exhale...) Anyone who can score. Preferably a lot. In fact, almost too much. Yeah, that's the ticket: someone who scores too much.
What is not welcome: Any player who was already been a Canuck and anyone who's currently a NY Ranger, a Calgary Flame or a Toronto Maple Leaf.

I'll be back tomorrow ready to update (as I did last year) all of the trades using the handy Despair motivator to break down the deadline with visuals.

Thankfully, the Avs gave me something to start with...it's almost too easy: 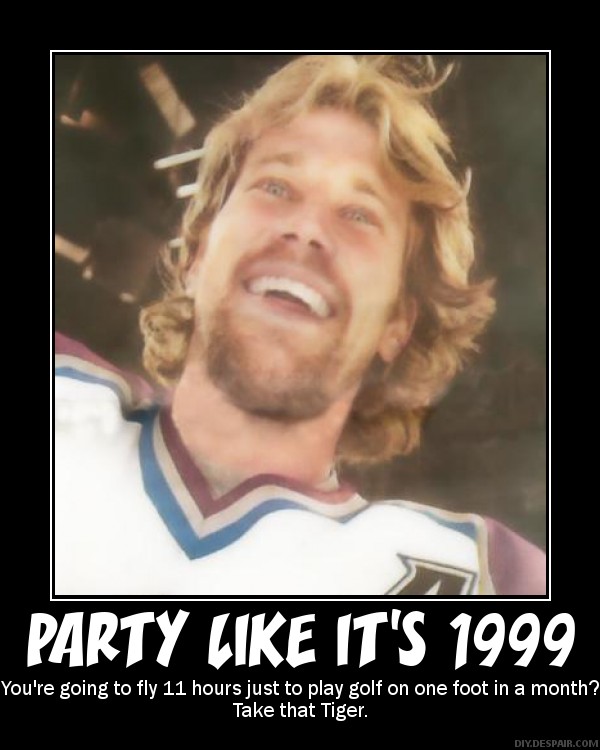