Share All sharing options for: Peter Forsberg signs with Colorado 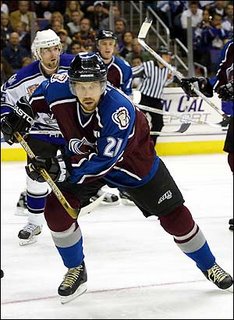 Well, here's a rumor that came out correct. Plenty of teams were inquiring about Forsberg, but Colorado and Philadelphia were frontrunners reportedly.

"We're proud to announce to our fans that Peter Forsberg has decided to come back and play with our franchise where he's enjoyed so much success early in his career," said Avalanche Executive Vice President and General Manager Francois Giguere in a statement. "His addition should complement our roster and will bring our team to an even higher competitive level."

The Avs will pay what's left of a $5 million per season contract, which is about $1 million. How effective is Forsberg going to be?

"Over the last several months, I have worked extremely hard in order for this to be possible. I am looking forward to putting this jersey on again," said Forsberg. "I have so many great memories of my playing days in Denver. I'm excited about helping my new teammates and former teammates in the coming weeks, and hopefully I am able to do that in the very near future."

This gives Colorado a huge boost, as Forsberg should inject even more life into a team that is on the outside looking in for a playoff spot.
Yeah, great, a team in our Northwest Division just got a whole lot better. However, how will Colorado's goaltending hold up? I know Theodore is playing better because he doesn't have that poodle-looking slut on his mind anymore, but can the Theo/Budaj combo get the Avs deep into the playoffs? The team would probably score so many goals that it wouldn't matter. Best case scenario?? The Avalanche MISS THE PLAYOFFS even with Foppa in the lineup. Now THAT would be gold!