On a Wing and a Prayer

Share All sharing options for: On a Wing and a Prayer 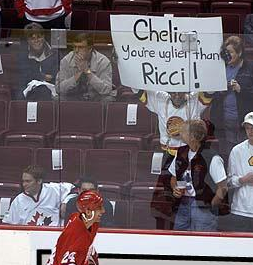 [Q] "What does on a wing and a prayer mean?"
[A] It means that you’re in a desperate situation and you’re relying on hope to see you through.
-- World Wide Words

Their reward for shutting off the suck valve? A meager two points separate them and 9th place Colorado while also separating them from the logjam of teams at 72 (Nashville, Calgary and San Jose). Translation: don't stop winning dudes.

Strolling into GM Place tonight is the best team in the NHL (though 3-6-1 in their last ten), the Detroit filthy fucking Red Wings (that's in their marketing slogan, right?). Usually this would be a bad thing, but not only are the Red Wings slumping more then usual but they are Fedexing players to the IR as quickly as Vancouver did a few months ago: Lidstrom, Rafalski, Kronwall, Hasek, Cleary and father-time Chelios are all on the mend.

Meanwhile, the Canucks finally got their Bieksa back, Luongo's coming off his best game of the season so far and the kids (Edler, Shannon and Raymond) are all picking up their game. Now, if we can just get the Sedins to remove their heads from their own ass we'll be all set.

So why am I bothering with the quote? Simple: we still need the damn points and the Wings don't. We still need this streak to keep going, the Wings can keep their losing streak. We have to go out there, smell the obvious blood in the water and take it to the wounded Wings, not sit back and watch them skate circles around us. Besides, if we stay in eighth we'll face them in the first round anyway so no time like the present to start being ornery.

Also, keep your eyes out for the Crazy Canuck guys and gals around GM Place. If you see JJ of Canucks Hockey Blog in fact, do me a solid and remind him I was robbed of the free tickets he was giving away (I know I know, what the hell am I going to do with them, right?). But I had another idea for Nonis come Tuesday: trade for Zednik! Not so much for him, but I'd like to see more of his wife Jessica.