Mats Sundin will NOT waive his no-trade clause

Share All sharing options for: Mats Sundin will NOT waive his no-trade clause 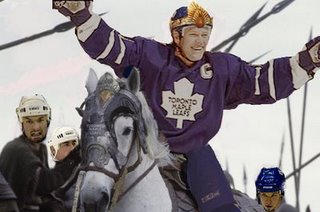 Yeah, it's official, and Sundin was not lying yesterday.

"I have carefully considered the team's request that I waive my no-trade clause," Sundin told TSN. "I have always believed I would finish my career as a Toronto Maple Leaf so the actual request was still a very difficult one for me to contemplate.
I have spoken to and listened to my family and those closest to me about this issue. In the end, there is no right decision in a situation like this one.
I cannot leave my teammates and join another NHL Club at this time. I have never believed in the concept of a rental player. It is my belief that winning the Stanley Cup is the greatest thing you can achieve in hockey but for me, in order to appreciate it you have to have been part of the entire journey and that means October through June. I hope everyone will understand and respect my decision."

Well, I guess Mats could play another 3-4 years in Toronto and see a Cup win come to fruition. It is possible.
Bottom line here is what Mats said yesterday...that it is not HIS problem that the Leafs are in a situation where they need the Swede to waive his no-trade clause and get a shit locker of high picks. He is right.
However, I still think he should have done it. But it was SUNDIN'S decision and I honor it as a fan of him. I also respect his desire to remain with the club that he is the captain of. There is honor in that.
Now, we shall see what trades unravel, as Sundin is officially off the market.