Live blogging right up to the Trade Deadline

Share All sharing options for: Live blogging right up to the Trade Deadline

2:54 PM
The Predators have acquired the much-moved Brandon Bochenski from the Anaheim Ducks for future considerations.
This guy must be a poison in the locker room, or lack consistent effort because he can't stick with a team.

12:57
The Predators have acquired Jan Hlavac from the Lightning in exchange for a 7th round pick. Hlavac is a dud. Nice move, Nashville.

The Caps traded Joe Motzko to the Thrashers in exchange for Alexandre Giroux.

12:15 PM
The Kings trade defenceman Brad Stuart to the Red Wings in exchange for a 2nd and 4th round pick. That's a fair bit to cough up for Stuart, who offence has dwindled in recent years.

12:11
The Wild have acquired Chris Simon from the Isles in exchange for a 6th round pick. TSN is joking that the Wild are looking like a football team: Boogaard, Fedoruk, Simon. No comment on this deal. I guess the Wild want to be bigger yet.

Waddell makes a massive deal minutes prior to the deadline, dealing Marian Hossa and Pascal Dupuis to the Penguins for Angelo Esposito, Erik Christensen and Colby Armstrong and a 1st round pick.
I know that Pittsburgh is going for it this season, but I really don't like this deal. I think Pittsburgh gave up too much for a jackass that may not even sign with them in the summer. How are they going to afford Crosby, Malkin, Fleury, and Gonchar, and now Hossa down the road? Not gonna happen. Is Hossa going to perform in the playoffs? We'll see in time. But I like Atlanta's choice in players plus the first round pick, as it adds depth. *NOTE* The addition of Pascal Dupuis to the deal to Pittsburgh almost makes this deal tolerable.


11:55 AMJust when I bag on Fletcher, he flogs Hal Gill to the Pittsburgh Penguins for a 2nd pick in 2008 and a 5th round pick in 2009. Nice move by Fletch. Finally, some picks coming Toronto's way.
The Rangers, who I'm sure wanted to get a bigger name, ended up getting Christian Backman from the Blues in exchange for a 4th round pick.

11:48 AM
Been a quiet hour. With 12 minutes left, the pressure is on Atlanta's Don Waddell to move Hossa or re-sign him. What about the Leafs, who are obvious sellers? It looks like Fletcher has his hands tied big time.
TSN panel is still talking about Nonis needing to acquire some scoring. I'm not sure they are aware of this, but I think Matt Pettinger is going to be our only acquisition. Like I said before: Nonis would get the equivalent of a Bryan Smolinski.....well, as far as offensive output goes. That is Pettinger.

10:57 AM
The Islanders have acquired Rob Davison from the Sharks in exchange for a 7th round pick

10:37
Aha! No more Cookie in Vancouver! It seems that Vancouver has traded Matt Cooke to the Capitals in exchange for Matt Pettinger.
Given Cooke's offensive futility this year and his inflated contract expiring in the summer, Nonis had to move him. Pettinger could be an upgrade here, if he stays healthy. Pettinger has a lot of hussle. Is this the only move that Nonis makes today? The thrift shopping by Nonis was expected. Pettinger makes $1 million per season through to the end of next year. Matt Cooke was making just over $1.5 million.
Pettinger can potentially score 20 or more goals. Cooke was supposed to score 20 or more goals.

"My greatest attribute is may skating," Pettinger told TSN on Tuesday. "I play a physical game. I don't know where I fit in there, hopefully on the top nine."

Of course you'll be in the top 9!! Welcome to Western BC, where you aren't buried behind an Ovechkin, Semin, Backstrom, etc.

10:13
The Caps have added another Ruskie to their team, acquiring Sergei Fedorov from the Blue Jackets. How much does Sergei have in the tank? Playing with Ovechkin and Semin should increase his productivity. Wow, McPhee digs in his pockets a little. Well, Michael Nylander proved to be an injury-prone jackass anyway. The Jackets get defenceman Ted Ruth back in exchange. Ruth was drafted 46th overall by the Caps last year.

10:03
The Avalanche continue their retro tour by acquiring Adam Foote from the Jackets. Now I really hope the Avs miss the playoffs!!! Talk about an overhaul. The Jackets get a conditional 1st round pick and another conditional pick if Foote re-signs with the Avs in the summer.

9:57 AM
Remember when Martin Lapointe was a hot commodity and got a $6 million contract when he left Detroit (or was it more??) Well, today he was traded by the Hawks to Ottawa for a 6th round pick in 2008. Nice addition of a checking winger by the Sens. But Lapointe will have to accept a discount next season or he will go the Anson Carter route methinks. Overpaid, but a decent leader.

9:35 AM
The deals keep coming:
Florida trades Ruslan Salei to the Avalanche in exchange for Karlis Skrastins and a 3rd round pick. Huh...now is Rob Blake going to Colorado?
The Hurricanes have acquired Tuomo Ruutu from the Black Hawks in exchange for Andrew Ladd. That is a swap of former first round picks that have not materialized into what was expected. Can Ruutu find his touch in Carolina like Samsonov has? 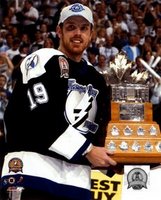 8:50 AM
Word is that the Canadiens have traded Cristobal Huet to the Capitals in exchange for a 2nd round pick. This says so much about the great play of Carey Price. Was/is Olaf Kolzig's contract renewed or does he become a UFA this summer?

8:43 AM
It appears that the Stars and Lightning have agreed to a deal that sends Brad Richards to the Stars. The deal is: Brad Richards and goalie Johan Holmqvist to Dallas for goalie Mike Smith, Jussi Jokinen and Jeff Halpern. Wow. Will Smith provide the goaltending that San Jose has lacked? I like this deal for both sides.
So the damned Stars have a Conn Smyth trophy winner added to their roster.


8:26 AM
Word is, Brian Campbell has been traded to the Sharks! Aha! Called that one! (Who didn't?) That is a solid addition by San Jose. They've been waiting to get that kind of a calibre of d-man. Campbell offers more than Rivet and Ozolinsh provide. This deal puts San Jose into the 'real deal' category. The deal was Brian Campbell in exchange for Steve Bernier and a 1st round pick. Let's see if Bernier can elevate his game in Buffalo. He has shown a lot of promise in the past.

8:00 AM Tuesday
Good morning! OK, what have I missed? Ah, a sweet load of piss. Leafs trade fan favorite Wade Belak to the Panthers in exchange for a 5th pick in 2008.
The Blues acquire Cam Janssens from the Devils in exchange for d-man Bryce Salvador. Janssens is a mean machine.
2 goon trades? That's all I missed? Not suprised.

10:57 PM Monday
You east coasters are lucky. You'll get a head start on the action. Tomorrow morning could see a flurry of deals, big or small.
It is now rumoured everywhere that the Dallas Stars are frontrunners in the Brad Richards race. We'll see in the morning. Good night.

7:50 PM MONDAY
According to ESPN, Rob Blake has agreed to waive his no trade clause. Apparently Colorado is his destination. Jeeziz, another Avalanche reunion? Bring Ray Bourque and Pat Roy out of retirement! I'd have to think that San Jose is really trying to land Blake though. Blake or Campbell, which one? Or both??
The Blues have re-signed Barret Jackman to a 4-year $14.4 million deal. Hey, isn't that the guy Bertuzzi took out in the playoffs once? Why yes it is! Wow. 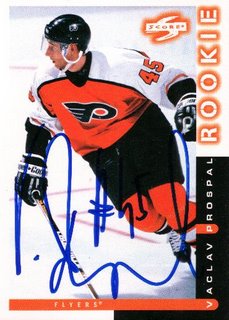 7:29 PM Monday
The Flyers have acquired Vaclav Prospal from the Lightning in exchange for defenceman Alexandre Picard and a 2nd or 3rd round pick in 2009. Picard is a big defenceman who can put up points.
Prospal and his 29 goals this season so far eases the loss of Simon Gagne for the Flyers and may spark the team out of its slump, even the the Flyers came back and won in a shootout tonight. Hey, at least Prospal isn't as injury prone as glass boy Gagne. Go figure: Prospal was drafted by the Flyers in 1993.
And speaking of Tampa defence, the Lightning just signed Dan Boyle to a 6-year $40 million deal. According to TSN, the deal will pay Boyle $6.66 million per year for six years. Boyle is worth every penny. No suprise on this signing. There was no way in hell the Lightning would let Boyle go.

5:44 PM Monday
Here is what Dave Nonis said today about what he's planning on doing at the deadline. He almost contradicts himself as to whether or not he'll make a move. But he does add that having Brendan Morrison back in the lineup in 1-2 weeks is like adding another player. True that. I suspect Nonis is going to flog a goon-type on the current roster, like Cowan. But I wouldn't expect much more than a deal for a 3rd liner.

5:35 PM Monday
Our favorite rumor monger Eklund has the Flyers seeking Dan Boyle and Vinnie Prospal out of Tampa (e4). To me that seems unlikely. I think the Bolts will sign Dan Boyle and that is their intention. The world's biggest phoney also states the Flyers are seeking the Prince of Darkness, Miro Satan.
Hal Gill was a late scratch for the Leafs game tonight, leading to massive speculation that some idiot team is going to sign this oaf.


5:30 PM Monday
Alright, starting now, I will list and analyze any trades that happen between now and lunch time Pacific tomorrow. Should be a piece of cake, right? A bunch of minor moves and only a couple big ones.
It seems that there is no doubt that Marian Hossa will be moved tomorrow. But that may depend on his asking price. He seems to want to play in Montreal.

"I'm prepared for both options - either I'll go or I'll stay," Hossa told a crowd of media people Monday after skating with the Thrashers in their practice. "It's interesting that we're playing in Montreal, but we'll see what happens.
It's a hockey city. I've played in Canada and I know how the people are crazy about hockey, so it's an interesting place to play. But right now that's all I can say."

Does Montreal even need this guy? They are cruising along just fine.