Share All sharing options for: Hawks negotiating with Forsberg / more news and rumors 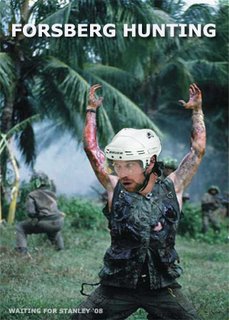 Just saw this at Yahoo:

The NHL trade deadline is Feb. 26, and the Chicago Blackhawks, for a change, are in the thick of rumors that are swirling around the league. Hawks general manager Dale Tallon has admitted involvement in the Peter Forsberg negotiations, and two European news outlets reported during the weekend that Forsberg, 34, is weighing a three-year, $11 million offer from the Hawks.

As reported today, there still is a chance that Forsberg will return to the NHL this season aching foot and all. I'm not banking on it. If this story about the Hawks' offer is even close to being true, then I'll tell you right now, there is no way in hell Forsberg is coming to Vancouver. Who the hell would sign Peter the fragile for 3 years?? At that price? I don't see Nonis even trying that.

Why is Flyers' GM Holmgren saying this:

"As soon as we have had the opportunity to speak further with Dr. Kelly and Simon, we can shed more light on this," Holmgren was quoted in the paper. "Needless to say, we are very disappointed with this news."

That's because Simon Gagne is going to miss the remainder of the season due to concussion issues. Bad news for the slumping Flyers. I swear, Gagne is going the Lindros route. His career may not last long as this is not his first concussion. Gagne is as fragile as Lindros and Forsberg. Useless.

The Flames added some muscle today, acquiring d-man Jim Vandermeer from the Flyers in exchange for a 3rd round pick in 2009. Isn't that kind of a high pick to give up for a goon?
Either way, the Flames just keep getting bigger.
Wanna see Vandermeer get killed by Boogeyman Boogaard? Check this out.

Eklund has Olli Jokinen going to the Sharks as an e3. Haha. Meaning bullshit. Yeah, this jackass is rolling in the popularity at trade season again. He won't make it onto a big sports show this year, thank Christ. He's doing his own show apparently. Be sure not to tune in.