Share All sharing options for: Good news on the horizon as the Wild invade GM Place tonight 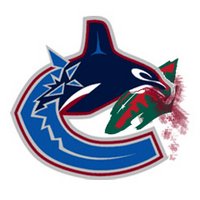 The Western Conference drama continues tonight as the Canucks really have to win and the Avalanche and Predators have to lose. The worst case scenario tonight is a Canucks loss, the Avs and Preds win, and Vancouver is 3 points out of a playoff spot and 7 points out of first in the Northwest behind the Wild.
Vancouver's next 6 games are crucial. 4 of them are against division rivals (2 against the Wild, 1 against the Oilers and 1 against the Avalanche) one is against the Predators, and 1 against Detroit. A continuing losing skid now and we can kiss the playoffs goodbye, or start doing the mathematics more seriously.
But we do have home-ice advantage. 4 of the next 6 games are at home.
Willie Mitchell may return tonight.

Thanks, captain obvious.
Mitchell's return is going to be huge.

Kevin Bieksa (lacerated calf muscle) took the day off yesterday but is said to be progressing ahead of schedule. He is expected to skate again today. He could make a comeback to the Canucks’ lineup before the end of the month.

Sometimes I forget that we even had Bieksallent on our roster. That's how long he's been gone.

We saw the bounces start going the Canucks' way against the Hawks last game. Hopefully that trend continues and the Canucks work consistently hard tonight. There's no time for screwing around. I'm trying to avoid cliche's, because like Jason Botchford said in his piece in the Province, it's the time of the year for cliche's in Vancouver.

I'm going to pick the Nucks to win tonight, 2-1. That will be back-to-back wins for the first time in a raccoon's age (January 8th), sparking an even-larger streak of wins. Or, at least, more wins more often.