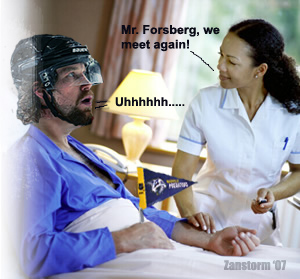 This from Don Baizley, Forsberg's agent today via TSN:

Ah, there goes a lot of the trade deadline fun. Now we know Nonis is going thrift shopping by February 26th for sure. Expect a risk or gamble offensive player(s) for lower draft picks.
With both Tomas Kaberle and Rob Blake saying that they are not leaving their respective teams today as well, the whole luster of a big active deadline is growing dimmer by the second. Who's suprised, except for the idiot rumor sites?

It was Steve Staios who overhand slashed Alex Burrow's arm after he scored the empty net goal to sink the Oilers on Saturday. Today, he was handed an undisclosed fine, and not suspended. Fair enough. If Burrows was injured on the play a suspension would have gone down for sure. Burrow's swinging slash on Jarret Stool's leg could have been reviewed as well. Ah well. Can't wait till these teams play again.

The Canucks are keeping quiet as to what exactly Pyatt injured after getting smoked along the boards by Zach the monkey Stortini. Apparently Pyatt will accompany the team on their 2 game road trip. He will not play Tuesday against Minny and is doubtful for Thursday's game against Nashville.

The 30 NHL GM's met in Florida today to discuss a variety of issues surrounding rule changes and what not. One of the biggies, and I'm not sure if Brian Burke initiated it, is to cut the minor penalties in regular season overtimes to 1 minute instead of 2. There's concern because a minor penalty takes up 40% of the 5 minute OT. I'm a little torn on the issue, but am slanted towards agreeing with this concept. Then again, I also think OT's should be 10 minutes long. 5 minutes of 4-on-4 and 5 minutes of 3-on-3 with no shootouts. Then again, if you had 3-on-3's and someone took a penalty, you'd have 2 minutes of 2-on-1's. Now that would be bat shit insane, wouldn't it?
Anyways, check out the above link for more on what the GM's discussed.