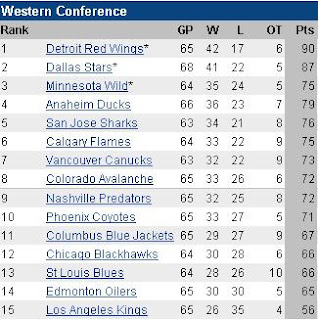 Columbus now stands in the Canucks' way as far as Vancouver putting some distance between themselves and the 9th spot Nashville Predators. The Preds have actually lost 3 in a row, including an 8-4 drubbing to the Sabres a couple days ago. Is Nashville going to slide out of contention?
The Blue Jackets can get into the thick of the race with a clean win over Vancouver tonight, however, they are playing very inconsistent lately, with 2 wins and 3 losses in their last 5 games. Over those past 5 games they beat Montreal and Ottawa after losing to the lowly Leafs 3-1 and the Blues 5-1.
Both the Canucks and Jackets are coming off losses. The Canucks made a costly error within the final minute of the game against the Avalanche and it ended up costing them the extra point. Look for Vancouver to rebound tonight, and beat the inconsistent Jackets 3-1.
Jeff Cowan may return tonight after serving a 1-game suspension. That would probably force Linden into the press box...or fetching Kesler's towel...or cleaning Naslund's protective cup....whatever. I'd rather have Linden in the lineup, in all seriousness.
Aaron Miller will return tonight as well, which means: goodbye Mike Weaver.
Just WIN tonight, Nucks. You gotta beat the teams that are lower than you in the standings.