Share All sharing options for: Canucks-Wild Preview: A night of new faces 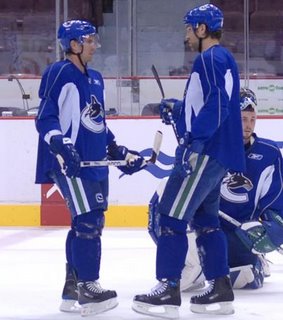 New Canuck Matt Pettinger will play on the Canucks' "2nd line" tonight with Alex Burrows and Ryan Kesler. I hope he can bring more to the table than Cooke did.
So that will put Naslund with the Sedins and Pyatt with Raymond and Shannon.
Jeff Cowan will sit our as he is serving a 1 game suspension for his high hit on Detroit's Dave Meech on Saturday.
The Canucks recalled Rick Rypien from Manitoba yesterday, and sent Luc Bourdon back down. Rypien will replace Byron Ritchie, who will not play tonight because of back pain.
The Avalanche will have Adam Foote and Ruslan Salei in their lineup tonight. That's a pretty good duo right there. Strong and mean. Both guys can make huge hits. According to Canucks.com, Peter Forsberg is in Vancouver right now and will address the media at 5:30 PST today. I hope he doesn't play tonight. He's probably going to wait a couple of games.
The new Avs beat the Flames in OT last night, putting them in 9th spot and only 2 points behind us. Tonight's game is crucial for both sides, so expect a playoff-like atmosphere at the Garage.
The following weeks are going to be intense in the West. Hell, tonight is intense. You watch the Canucks play and watch the out-of-town scoreboard closely, praying for the teams around you to lose.
Are the additions of Foote, Salei and Forsberg going to put the Avs in a playoff spot? Is the Theodore-Budaj combo consistent enough to help the Avalanche streak?
What the hell is going on in Minnesota? 12 goals against and 4 goals scored in their current 4 game slump and a fall from the Northwest Division lead. Unreal.
As you can see from the current standings below, the Canucks have 2 games in hand on the trailing Predators and Avalanche. We'll have to win those, sez Captain Obvious.
I say we beat the Avs 4-3 in a shootout tonight. It's going to be close. The Canucks are riding high on a 4 game winning streak and look poised.
Vancouver has played Colorado 4 times this season and has won 2 and lost 2. The Avs have won the last 2 against us. Time for change. 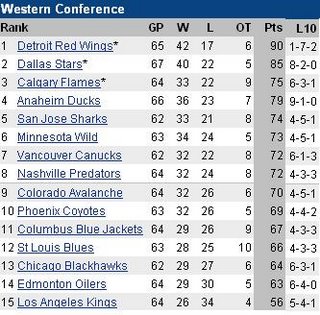