Canucks steal a point in a Wild one

Share All sharing options for: Canucks steal a point in a Wild one 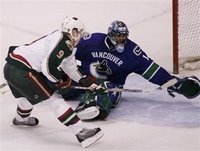 The glass is either half empty or half full. That is what I'm left deciding after tonight's insane shootout loss to the Wild. On one hand, Willie Mitchell returned and played super, regardless of Gaborik deking him out and scoring. Mitchell does so many good little "big" things out there and it's great to have him back.
I was talking pregame about how the Canucks needed more bounces to go their way, and they did. It's just that Minnesota had the same bounes as well. Pucks were going in the net off legs, skates, sticks, the back of Luongo's cabbage...etc. Crazy.
I didn't think Luongo was completely into this game. He looked out of position often. His performance in the shootout costed us the extra point. Yes, I am putting the heat on Louie for that. He looked like he had forgotten everything Ian Clark had taught him, especially in the shootout. He looked like the Luongo in October 2006 when he first came here. And the Wild made him look stupid for it, repeatedly. Every shooter froze him with a fake and had a wide open net to shoot at to Luongo's left. Only Gaborik flubbed his shot, but would have beaten him on the same side.
More negatives: the Sedins and Naslund. Sorry kids, but flashy little dangly moves and plays don't work against rough-nosed teams that kick the shit out of ya. All 3 were in the minus category tonight and were a disappointment. It's just too bad that sometimes I feel like we have $13 million tied up in 3 Swedes who have the heart of a potato sack. They should almost become soccer players.

Guys like Mitchell, Edler, Shannon, Kesler, Isbister, Burrows really came through tonight. You had to love Burrows fighting Rolston for his hit on Mitchell. That's commraderie. That sparked the team to come back. Great stuff. Alex Edler has the poise of a seasoned vet. I wish he would have got the hatty tonight.
The Canucks team looks to be headed in the right direction now. At least they are still in the playoff race, as both the Avs and Preds lost tonight. Perfect.
The Wild, however, are already playoff-ready. This team is simply awesome. It looks like a team that will go deep in the playoffs. They have guts, skill, speed, goaltending and discipline.