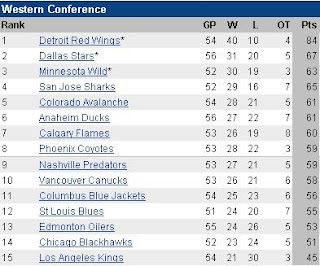 Nashville's 4-3 win over Colorado last night both did us a favor and kicked us in the ass. They kept the Avs from going ahead of us by more than 2 points in the standings, but it also enabled them to pass us in the standings, dropping the Canucks down to 10th. This is putting an increased pressure on the Canucks to snap out of their current slump. We have won only 2 of our last 10. The Stars are returning home tonight after winning 3 on the road. Dallas has lost their last 2 home games.

-The Canucks have both won 1 game and lost 1 against the Stars this season. Dallas won 4-3 last Tuesday night.

-We will get a look at defenceman Zach Fitzgerald tonight as he has been called up from the Moose today. Mike Brown has been sent back to Manitoba, which suprises me. I have liked his physical play and the chances he has generated.
I believe Fitzgerald is playing because Aaron Miller has a sore from from blocking a shot against the Panthers last Friday. Great. The blueline curse continues. Also, Canucks.com is reporting that Mattias Ohlund returned to Vancouver for undisclosed personal reasons. What the fuck is going on here????
However, Sami "Glass" Salo may make his return tonight after missing a couple of games with a sore groin.

- Congrats to Daniel Sedin, whose wife gave birth to a baby boy Swede on Sunday morning. Apparently he looks a lot like Henrik. Uh-oh.

Alain Vigneault summed up the Canucks' January in proper fashion:

"In all of the four months that we’ve been in action probably the month of January has been the one where we’ve played the best and got the least amount of results for it. We just have to keep going. We’re looking to improve, we’re looking to find ways to win and we’re going to continue to do that."


It's not like the Canucks are getting blown out, or that they are not even close to turning it around. They are in the same position as in the beginning of the year, a few breaks away from a winning streak. They just need to tighten up more, from the goaltender-out.