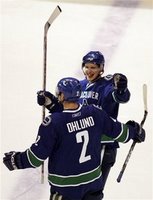 So much of the conversation around the NHL today has been focussed on Mats Sundin. OK, enough of that.
On to the Canucks and Wings, who both come into tonight's game with key injuries. In my opinion, Detroit is worse for wear. Chris Chelios took a shot off the foot in last night's game against the Flames. He is questionable for tonight. Other Wings injuries include Brian Rafalski (groin), Niklas Lidstrom (ligament strain), Dan Cleary (broken jaw), Dom Hasek (hip flexor), and Niklas Kronwall (clavicle). That's a lot of lost man power and lost experience. I like it!
The Canucks may be without Markus Naslund tonight, as he tweaked his groin last game against the Predators. The talk on the Canucks.com forum is that Linden will wear the "C" in Nazzy's absence. How much of a loss is Naslund? After last game, I'd say not a whole lot. Or, I'm not concerned anyway. Not nice...but the truth.
The Canucks have not beaten Detroit in 3 games this year. It's time for that to change, as Detroit has lost 7 of their last 8 games, and like Canucks.com points out: they have been shut out twice in their last 3 games. I love it! We need to take advantage of the depleted slumping Wings.
A win tonight will put us 4 points ahead of the 9th-spot Avalanche again. Let's get it done. I say we win 4-1 tonight.
The pregame words-pokes at center ice between Downey and Burrows and the crowding of the players afterwards indicate that there will be some anamosity in tonight's game. Gotta love how Don Cherry loved that stuff but didn't like Hank Sedin and Zetterberg doing the friendly chit-chat going on at the same time.

Ah, so Naslund IS playing tonight. He played a pretty good first period.
The refs tried to squander any rough stuff at the start of the game by handing Aaron Downey an unsportsmanlike conduct penalty 2 minutes in. From that point the Canucks looked really poised, outshooting the Wings 14-9 and playing our type of game. Vancouver is pressuring the inexperienced Detroit d-men a lot and it seems to be paying off. However, we have run into a hot goalie named Jimmie Howard. The only shot that beat him came off the stick of Alex Edler, and the skate of one of his defenders. To me he looks sharper than Louie right now.
The Canucks have to be careful though. Mike Weaver coughed the puck up to Franzen and then tripped him, giving Detroit the man advantage. Regardless of the bad break Vancouver got with the faceoff ending up in their zone, you can still see that the Wings can move that puck around ultra quick. A point shot by the kid defenceman Derek Meek dribbled past Luongo and the game is tied at 1 (Datsyuk tipped it). Don't do that again, Weaver. I just finished praising your name a couple days ago.
I like the confidence the Canucks are showing. And I'm really liking the Shannon-Raymond combo as well. Speed kills.

I don't know what kind of crack these refs smoked before the game, but they are doing a terrible job out there. First the missed call for a faceoff outside the Canucks' zone that led to the Wings' first goal of the night, to the roughing farce call on Detroit's Quincey that led to the Salo powerplay go-ahead goal, to the elbowing call they just laid on Bieksa. Bieksa accidentally elbowed Kesler of all people, not a Red Wing player! That's the first time I've seen a penalty called on a guy for elbowing his teammate! Bloody hell!
Like Jim Hughson and Craig Simpson alluded to: it seems that the refs are doing everything in their power to avoid any outbreaks. They are probably whistle-happy because of the pregame warmup skirmish and/or the Canucks-Oilers' fightfest from last week. Lay off the crack, assholes! Let these 2 teams play.
I will say this: that Meech kid is playing super ever since Cowan gave him a Macho Man elbow in the first period.
The Canucks have not lost all year when leading after 2 periods. They just need to settle down and stop taking so many penalties, even if their penalty-killing is superb tonight. They are playing with fire here.
The Wings are 1-for-6 on the PP so far. The Canucks are 1-for-2. The shots are now 20-20 because the Canucks spent half of the 2nd period killing penalties.
The Sedins, who I crucified last game, seem to be improving as the game goes on. They have 3 combined points so far.
Canucks defencemen have scored 3 of our last 5 goals. They are our secondary scoring. Much like Detroit I suppose. 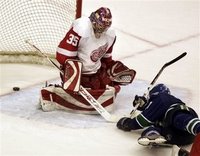 Ah, the refs listened to me. Only 1 minor called in the 3rd. The Canucks showed some great defensive work in the final frame, and some killer instinct as well. Ryan Kesler, who I think is going to score 35 goals in a season someday soon, scored 2 almost identical goals through the legs of Howard. Impressive. The Sedins and Naslund had a stellar period as well. The Canucks win 4-1. Hey, didn't I call this score? That's 2 in a row!
I'm thinking that Raymond and Shannon are this year's version of Bulis and Hansen. Lots of speed and creativity. It's just that Shannon and Raymond have a higher combined IQ. No offence to Hansen, it's just that Bulis had the brain capacity of a mentally-challenged chicken.
We are 4 points up on Colorado now, and 1 point out of first in the Northwest. The Wild, who have not played since Wednesday, have lost 2 in a row. The Canucks have now won 4 consecutive games. I see a shifting of power here! Love it!