The speculation on Bieksa's Canucks return has ended. After playing 1 game in a conditioning stint with the Moose last night, where Bieksa had an assist in a 2-1 victory, Bieksa is ready to go tonight against the Preds. That is good as long as Bieksa plays well. Like I said earlier, he was struggling at the beginning of the season prior to getting injured. I'm going to be positive and think of it as a boost to a Canucks squad that seems to have turned their game around. I think Daniel Sedin summed it up really well a couple of days ago:

"When you’re losing, you’re almost happy just to be in games. You don’t really play to win; you play not to lose. But I think we’re over that now."


I'm feeling pretty good about our chances of a win tonight. The Canucks lost 3-0 to the Preds back in November, where we were held off the scoresheet by some 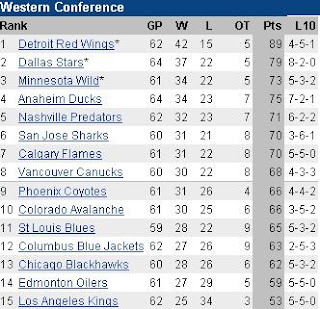 kid goalie named Dan Ellis. Vancouver had 29 shots. The Preds scored 3 goals on 15 shots total. 2 of them were on the powerplay. But this is a revived Nucks team. I say we win 4-2.
You can see by the standings the importance of tonight's game once again. It would be great to pull 4 points ahead of the Coyotes and have played the same amount of games.