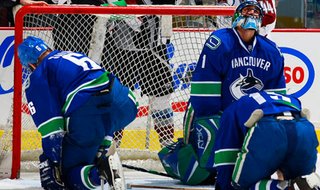 After a crushing loss to the Avalanche last night I'm left scratching my head, wondering what the hell is going to happen next to this Vancouver team. The Avalanche were getting to all the loose pucks in front of the net and getting major bounces to go with it, and this Canuck team is not getting the breaks at all, hitting posts, missing golden opportunities, etc. It's not a pretty sight, as the worst case scenario nearly happened last night. We lost, and every team that we are chasing, or are close to in the Western standings except the Coyotes won last night. As you can see below, the gap between us and the rest of the Northwest Division teams ahead of us has widened overnight.
Tonight, it could get worse if we don't win. The Coyotes, who trail us by one point play the Predators who lead us by 1 point in 8th spot. We don't need the Preds winning tonight. But they are 6-2-2 in their last 10. The Coyotes are 4-3-3. Vancouver is 2-5-3.
Positive news? Aaron Miller, Lukas Krajicek and Willie Mitchell are now all day-to-day with their respective injuries. It will be great to get these stabilizing forces back on the blueline, as I think the team needs it.
More negative news? Jonathan Toews, who has missed the past 15 games with a knee injury, is expected to make his return to the Hawks lineup tonight, providing them with a serious spark, especially for Patrick Kane, who has struggled to put up as many points as when Toews was in the lineup.
What is going to happen tonight? The Canucks respond well after getting drubbed. On October 10, the Flyers destroyed us 8-2 and the Canucks responed with 2 straight wins afterward. But that was with a full lineup. I don't know what to expect with this current depleted lineup. But I tell ya, I'm not feeling so optimistic at this point. So I'll pick the Hawks to win this one 3-2.
Go Canucks go???? It's time to snap out of this slump, however it must be hard to do, as the players know where they stand in the standings. The pressure on them now is huge. A few lucky breaks here or there would be nice.

"The effort has to be better. We have to battle and win the one-on-one battles, and obviously get some offence. We need some more quality chances."

Why couldn't his last name be Alredsson or Sundin? Those Swedish captains get something done out there.

Game Time: 7:00 PM PST
TV: Sportsnet HD. If you are going to lose, at least look good doing it in high definition! 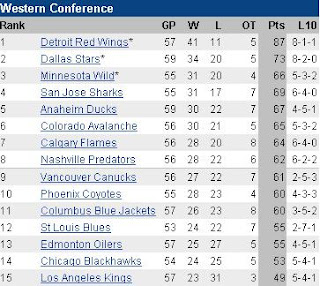